After the death of Zobina, Gottes decided to end the world in a hatefilled rage. Summoning Kirasaurus, the saurian was sent to guard the entrance to the Underground Palace of Dinosaurs, but was jumped by both Izenborg and Golda. It was joined by one of the seven Magmadons in it's fight, but was killed by Golda. 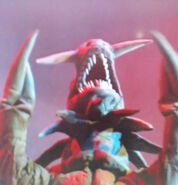