This may not be the article you are looking for. For the actress, see Kirara.

"Cease this useless resistance. The Princess says she's coming back to the Moon!
The parents who raise you are more important than your birth parents. She grew up on the Earth!
Fool! You can't be raised unless you're born! There is an order to things!"

TBA
Kirara (キララ, Kirara) was a Kaiju that appeared in the TV series Ultraman Leo. The guardian of Princess Kaguya, Kirara journeyed to Earth from the Moon to take her home. However, as Kaguya had grown fond of the Earth and her foster family, she refused to leave; he then attempted to forcibly return the Princess to her true home. Fortunately, Leo attempted to intervene on Kaguya's behalf, and while Kirara was stronger than him, he was able to hold the monster off for long enough until Kaguya was able to pacify him, electing to return to the Moon under her own volition.

Fifteen years after Princess Kaguya sent to Earth, Kirara wanted her to return to the moon. However, Yayoi/Kaguya refused, having grew fondness towards Earth even her own foster family won't let her go. Kirara still wanted her to return and flew towards Earth to retrieve her by force. MAC sensed this and resort to protect her from Kirara at all cost. At night, Kirara landed and fired a green beam of energy towards Kaguya, causing her to gain her traditional regal attire. The monster quickly created an earthquake that rocked her hometown, injuring several soldiers of the JSDF and sending MAC's defensive line into disarray. Meanwhile, Princess Kaguya walked towards Kirara, telling her family that she would return home, as the monster lowered his hand and ordered her to climb on. Gen transformed into Ultraman Leo and dragged Kirara away from Kaguya. After Leo found himself overpowered multiple times, he took the Ultra Mantle and tied it to Kirara to cover his stomach as he began to gain the upper hand later on. As the battle continued, the princess tried to halt both sides and decided to return with Leo finally sparing Kirara and went away. Kirara hit her crescent moon necklace, causing her to break but reviving her princess nature. Both Kirara and Princess Kaguya returned to the moon via a yellow light. Japan Masterpiece Folklore Series - Farewell, Princess Kaguya 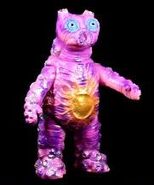 Figure of Kirara by Bear Model

Kiraa rises from a volcano on the moon 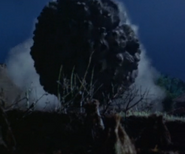 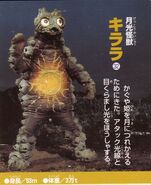 Kirara in a Magazine 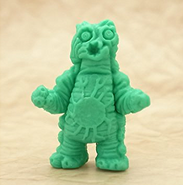 A Kirara eraser
Community content is available under CC-BY-SA unless otherwise noted.
Advertisement