Arriving in the meteor fragment, Kupukupu was a peaceful monster who meant no harm in his surroundings. However, Earth was still sensitive to alien sightings and Kupukupu was caged. MAT was quick on the case and despite the pleas of several children around the monster, Kupukupu was tragically destroyed by MAT out of paranoia.

After the destruction of Kupukupu when the tiny animal was blown up by MAT, a fragment of the creature was gathered by a small boy and it lived on and mutated into the monster Kingstron. Appearing as a giant mural of the monster on the boy's wall, Kingstron first made his appearance by destroying the room of the boy's family's apartment. MAT returned to the scene and attacked the mural that was Kingstron. Provoked yet again, Kingstron emerged from the wall and attacked MAT himself by attacking the building everyone was inside of. Endangering the boy in his blind rage, Go transformed into Ultraman Jack to do battle with the monster. At first Jack had the upper hand due to Kingstron's size, but once Kingstron used his energy bolts, the tides shifted to the monster's favor. Jack was about to use his Ultra Bracelet until Kingstron knocked him over making the bracelet come off, so Jack tried to use his Spacium Beam, which didn't phase Kingstron. Jack endured the battle until he found an opening and used the Ultra Bracelet on the monster, reducing Kingstron into a skeleton and ending its life for good.

Kingstron reappears in the TV series Redman episodes 45 and 50.

In episode 45, Kingstron fights the opposing monster Zaurs at first, with him having the upper hand, until Redman shows up and breaks up the fight. Even though the two monsters decided to work together to defeat Redman, Kingstron was eventually killed by the Red Fall onto Zaurs with the other monster being killed afterwards. 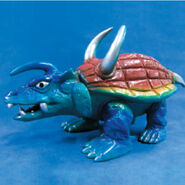 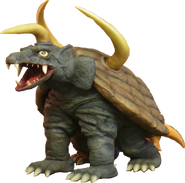