"Stop pretending. You love strong, cool monsters, don't you? You love monsters that rampage and destroy towns. But people laugh at you when you said that. They say liking monsters at your age is juvenile, lame and stupid. I'll show you who's stupid! I'll show you! How amazing and terrifying monsters really are! I'll destroy everything! I'll tear down everything in the world! Run wild, my strongest monster, KING OF MONS!!"

King of Mons (キングオブモンス Kingu obu Monsu) is a Kaiju created by a boy's greedy desire for the strongest Kaiju. King of Mons serves as the main antagonist of the film, Ultraman Tiga, Ultraman Dyna, & Ultraman Gaia: The Decisive Battle in Hyperspace. Despite its subtitle, King of Mons is not a monster born from fusion, but his clay model uses parts "loaned" from Basiliss and Sculla, the latter two would be spawned at some point in the show.

King of Mons was a Kaiju created by the evil thoughts of Hiroshi Kashimada, an Ultra Kaiju fanatic who wanted to make the strongest monster to defeat Ultraman Gaia. Using the Red Sphere that brought Gaia into their world, and making his Kaiju out of a clay statue as a demonstration of what it would look like, Hiroshi's creation came to life as he made his wish to the red sphere, and King of Mons was born.

"I can hear the voice from this ball. But in truth, its just our voices."
"Yu! Quick, make the wish. Make the monster disappear!"
"I don't like this world anymore!"

Shortly after, Gamu transformed into Ultraman Gaia and battled with King of Mons himself. Just as it appeared that Gaia was winning, King of Mons spewed forth Basiliss and Sculla, monsters created by Hiroshi's co-horts while creating King of Mons. Together all 3 Kaiju triple-teamed Gaia and the battle was one-sided once again. Not giving up hope, Tsutomu found the Red Sphere and made one more wish to help Gaia. Granting Tsutomu's wish, Ultraman Tiga and Ultraman Dyna were manifested and came to assist Gaia against the 3 Kaiju. As Tiga fought with Sculla and Dyna fought with Basiliss, Gaia was once again left alone with King of Mons and soon regained control of the fight. After Sculla and Basiliss were killed by Tiga and Dyna, King of Mons was crippled as a result of their deaths, leaving him to be destroyed by Gaia's Photon Stream. Ultraman Tiga, Ultraman Dyna, & Ultraman Gaia: The Decisive Battle in Hyperspace

King of Mons reappeared in episode six of the series Ultraman Orb as a Kaiju Card used by Jugglus Juggler in a card game with Alien Nackle Nagus and Alien Metron Tarude. The Forbidden Forest

"We still have, a special trump card. With that power, protect this city! Fight! Our strongest monster! KING OF MONS!"

The three boys who previously created King of Mons grew up with different jobs. When Shunsuke Kuji threatens the city with Kaiser Gyrares XIII, the three boys reunited by robbing the Red Sphere from him and summon King of Mons. As both monster clashes, the King of Mons was greatly overpowered by Gyrares and blown into pieces by the golden monster's energy ray. Tiga, Dyna, and Ultraman Gaia Novel: The Adventure in Hyperspace 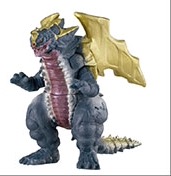 King of Mons, Basiliss, and Sculla beat up Ultraman Gaia