Fireman episode 18 "He did it! Fire-Dash"

King Zauras (キングザウラ, King Zauras), or King Zaura, is a Kaiju introduced in the Tsuburaya series, Fireman with a two part episode.

Brought to Earth as part of Alien Sulpher's plan to conquer the world, King Zauras seemed tailor-made to defeat Fireman. When one of the Alien Sulphur's agents, disguised as a nun, summons King Zauras from a volcano he was hiding in, he started his rampage. Daisuke Misaki, having been at the volcano himself, transformed at once to deal with the alien saurian. However, King Zauras was unlike any opponent the volcanic hero had faced. His armored hide is impervious to the fiery hero's physical and energy attacks. And what's more, the alien agent was guiding the monster's every move like a puppet on a string, making it use its tail to bash and wrap around the hero to crush him, its smoky breath to choke him, and its own physical strength to batter Fireman around like a rag doll. Even the airforce, which had been mobilized to help Fireman, could do little as even Fireman's deadly Fire Flash could not so much as singe the monster's hide. However, the alien agent called back King Zauras before it could strike the final blow.

Spotting Daisuke again, the Sulpher agent once more summons King Zauras to finish the job. Misaki transforms into Fireman and does battle with the alien menace, the airforce once more provided backup, but could not pierce its armored hide. Fireman once more used his Fire Flash, but to no avail. Soon, the hero's energy started to run out. The volcano erupted, lava cascading down the slopes and threatening a little boy. Fireman saved him, but at the expense of his life. His energy ran out, his jewel and eyes dimming as he burst into flame and disappeared. Meanwhile, King Zauras decimated the airforce as Fireman was retrieved by his father, the ruler of the Aban Kingdom.

When the hero arrived once more, revitalized and strengthened, the Sulpher agent recalled the beast for another encounter. When next it was summoned, it was ordered to kill Misaki for good, but when the hero transformed, the third and final battle was waged in this war between giants. However, this was not the same Fireman that King Zauras fought before. Having been strengthened by his father, Fireman was able to deal with the beast hand-to-hand while the airforce attacked the Sulpher's spaceship, damaging it. Still, King Zauras was not one to be underestimated as it used its hurricane-force winds to keep Fireman at bay and throw him off balance. However, the SAF, in their moglian, arrived to distract the creature long enough for Fireman to get his second wind. King Zauras was tossed about like a rag doll while the Sulpher Agent, feeling that the battle was lost, retreated to her damaged ship only to have it, and her, be destroyed by Fireman's eye beams. He then turned his attention to King Zauras. and unleashed his newest, most powerful attack; the almighty Fire Dash! The monster's armored hide was no match for the attack, and was reduced to flaming debris while Fireman stood back up, victorious. 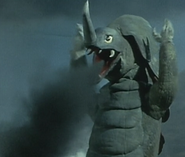 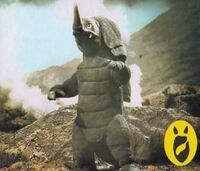 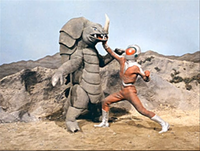 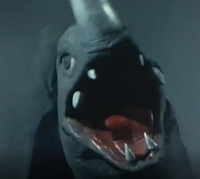 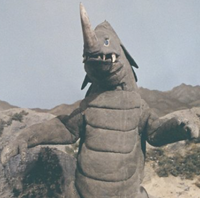