TBA
King Wonder (キングワンダー Kingu Wandā) is one of the many Kaiju that appeared in the series, Mirrorman.

One day SGM detected an Invader object that crash landed on the near side of the Moon. This object emerged as a monster named King Wonder who soon attacked the SGM moon base after a probe discovered him. King Wonder was welcomed with missiles launched at him, most of which missed as he approached. The base was soon annihilated and SGM launched a powerful rocket at the monster's back although after the explosion King Wonder mysteriously vanished. He emerged from a crater with no damage some time later, Kyotaro eventually taking a gamble to go to the Moon and fight him as Mirrorman. While Mirrorman traveled using a lake and a satellite for reflections, King Wonder continued his rampage against the SGM moon base to wipe it out. The hero eventually made it to the moon, but due to the lack of an atmosphere and low gravity his physical attacks were not as strong. King Wonder used his rear pincer to briefly grab Mirrorman who then managed to escape them. Mirrorman was quickly running out of air as King Wonder was gaining the upper hand and eventually used his rear pincer to shock the hero. He soon escaped with aid from the Mirror Knife that weakened and eventually dismembered the rear pincer. The fight then ended with Mirrorman killing King Wonder with the Silver Cross and using the Mirror Defense to reflect his forehead laser back at him.

King Wonder appeared in episode 38 of Mirror Fight. Stock footage of his fight in Mirrorman were reused in this series. 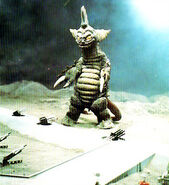 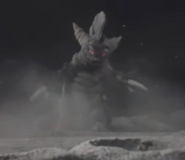