TBA
King Tortoise (キングトータス King Tortuisa) is a turtle Kaiju who is the husband of Queen Tortoise and the father of Mini Tortoise.

King Tortoise is a species of Ouron Island turtle that turned super huge 30 million years ago. His mate, Queen Tortoise, wanted nothing more than to sire a family in peace on their island. King Tortoise watched on as his mate swam ashore to lay their brood. However, his mate was soon captured, calling King Tortoise to rise from the ocean to protect his family, but the poachers specialized weapons rendered the massive sea monster unconscious. Later, the Queen Tortoise was taken captive as well as their eggs and lead away, but her mate wasn’t far behind, waiting for the chance to liberate his family. As ZAT attacked Queen Tortoise, her mate came and freed her from her bonds, the two fleeing to come back for their revenge on those who had so terribly wronged them, including the spilling of their unborn children’s blood. The two enraged parents chased down two of the poachers who stole their offspring, crushing their car and scaring them half to death. Later, the male monster attacked a ship at sea carrying several of the poached, attacking with unrelenting fury and destroying it with organic bombs, killing all on board. King Tortoise was soon called by his mate to save her from Taro, quickly aiding her by bombing Taro from the sky. Taro used the Stormium Ray to shoot him down. But the two Kaiju had a trick up their sleeves and both spun rapidly, trapping Taro in an energy tornado! The Ultra was completely helpless before their attack, soon forcing him into full retreat. The two monster then took their revenge on two more of the poachers, killing them. The two monsters left back to their island, their vengeance done, the two retrieved their eggs and began to nest again. ZAT, wanting nothing more than to help the Kaiju retrieve their offspring, put the eggs in a huge basket for them to carry home. ZAT took the eggs back to the island, the twin giants in toe. However, once the two were sitting on their island in peace, the military double-crossed them and attacked, destroying all but one of their eggs! Queen Tortoise took the egg in her mouth and the two soon sunk with their island. While believed dead, the two were madder than ever and would have their vengeance. After Queen Tortoise was unfortunately killed, King Tortoise came to claim their last child and avenge his mate, assaulting Taro with unrelenting fury after letting Mini Tortoise climb on his back. Once Taro was down, King Tortoise let his daughter down and grew her to giant size. The two beat down Taro, who refused to fight back, instead taking Queen Tortoise’s body and leaving with it into space, leading the two. King Tortoise tried to get his daughter to fly, but she was just a baby and too young, and now too large to be able to be carried by her father. Thankfully, Ultraseven suddenly arrived, somehow alerted to the problem and picked let Mini Tortoise hang onto him. Ultraseven took Mini Tortoise into space, King Tortoise following behind. Once in space, the Ultras took the family to Ultra Country they’d be able to live in peace for the rest of their days. 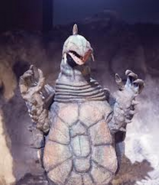 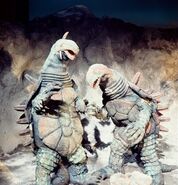 Figure of King Tortoise, by Bullmark. 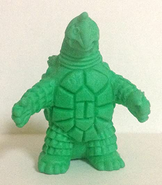