King Myra​ (キングマイラ Kingu Maira) was a Kaiju from the now destroyed Planet Sorkin that appeared in Ultraman: The Adventure Begins. He traveled to Earth in a meteor that eventually landed in New Mexico. At this time he took the appearance of an infant of his species called Wylon (ウィロン Uiron).

The sinister leader of the Sorkin survivors, Wylon crash landed to Earth in New Mexico and was found shortly after Zoon. Being brought to a research center in New York City, he was awoken from his meteorite, and revealed himself as an adorable rabbit-like creature. Wylon was being tested on extensively, although once he was finally alone he grew to his true form of King Myra and tore his way out of the building.

After breaking out of the building, King Myra attacked New York City with wanton destruction in his wake. King Myra was virtually unstoppable until the Ultra Force arrived to attack him. However, no matter what tactics were used to fight him, King Myra always somehow found away around it and even managed to use his extendible tail to throw the Ultra Force's fighters. Within a short amount of time Ultraman Scott, Ultrawoman Beth, and Ultraman Chuck made themselves known to King Myra. During the battle it seemed as though the Ultras had it under control until King Myra teleported and grabbed all three of them with his gigantic arms. Once the national guard arrived, King Myra dropped the Ultra Team and began to lay waste to the military vehicles. While King Myra was distracted by the military, the Ultra Force's mothership managed to escort the Ultra Team to outside of the atmosphere where they recharged their energy and returned to Earth. After a sonic device was used to slow down his teleportation King Myra was greatly weakened and tried to escape only for Beth to use the Ultra Spout and Chuck to use an energy bubble. While King Myra was being transported out of the atmosphere, his tail reattached to his body and disintegrated the bubble. However, the Ultra Force quickly threw King Myra into the sun with Scott finishing him off with the Granium Ray. 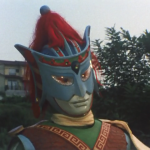