None
King Molerat (キングモーラット Kingu Mōratto) is a mole rat-like Kaiju that appeared in the TV series, Ultraman Tiga. He appeared in episode 30.

King Molerat was an average molerat until it mutated after consuming underground waste material that was abandoned by man. King Molerat came to the surface to feed on livestock from a nearby Zoo, but due to the bright sunlight the monster was weakened by its intense brightness and so went to sleep to pass the time. Once night came, King Molerat awoke and began a bloodthirsty rampage in search of food, setting its sights on cows of a nearby farmer. GUTS tried to stop the monster without doing too much harm to it, realizing it was only a mutated animal, but King Molerat's hunger made their efforts futile. Eventually, Daigo transformed into Ultraman Tiga and was able to hold off the King Molerat in his Power Type. Just as Tiga was about to kill Molerat with the Zeperion Beam, he was stopped by Rena of GUTS, who pleaded that the Ultra Warrior spare the monster. With that in mind, Tiga used a Cell Change Beam to reduce King Molerat into a smaller and harmless version of it. It was later named Morat by Horii and placed at the petting zoo.

Unable to destroy the monster, Tiga decided to used the Cell Change Beam to reduce King Molerat into a smaller and harmless version of it. Horii later renamed it as Morat (モーラット Moratto) (anagram for the word Molerat) and for Rena nicknamed it Mora-chan (モラちゃん, Mora-chan) as it lived in the petting zoo for the rest of it's life.

There are only two figures of King Molerat, the first common one is the Bandai vinyl figure of King Molerat. This figure has only two points of articulations, the two are the ears, they can rotate 360 degrees with no problems.

The other one is the Gashapon version which doesn't have any articulation, this figure is 3 inches long, small figure.

King Molerat during the daytime. 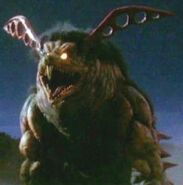 Morat in the petting zoo. 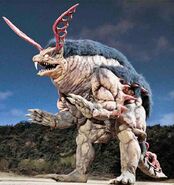