TBA
King Moa (キングモア Kingu Moa) was a kaiju that appeared in episode 16 of The☆Ultraman.

Descended from the extinct giant moa was a moa chick that traveled with seagulls throughout the Pacific Ocean until a volcanic disturbance scarred his flock away from his island. The moa chick eventually landed on a luxury where the Scientific Defense Guard was sent to investigate. Mutsumi delivered the moa chick to one of the scientists aboard the liner hoping to care for it. When the moa chick's heart started to fail electricity was used to stimulate it. Instead of just reviving it, the moa chick grew exponentially until it grew into King Moa. Upon growing, King Moa wrecked havoc on the luxury liner and easily fought the Scientific Defense Guard with little issue. Upon accidentally whirling Mutsumi being in ocean, King Moa retrieved her with Choichi attempting to sneak on the giant bird's talons only to fail. King Moa transported Mutsumi to his island home to take care of her like she did him and even protected her from a giant great white. However, Choichi turned into Ultraman Joneus and arrived on the scene to save Mutsumi and fight King Moa. Once Joneus managed to beat King Moa down, Mutsumi pleaded to the hero that the giant bird meant no real harm. Instead of finishing off King Moa, Joneus returned him to his original form and flew off. 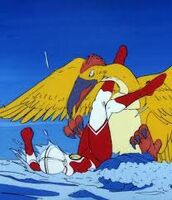 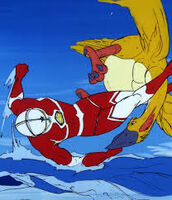 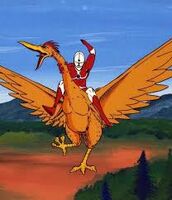 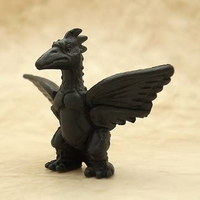 A King Moa eraser
Community content is available under CC-BY-SA unless otherwise noted.