Return of Ultraman episode 32 "Decisive Battle Under the Setting Sun"

King Maimai (キングマイマイ Kingu Maimai) (sometimes spelled without the space[1]) was a Kaiju from the TV series Return of Ultraman, he first appeared in episode 32.

Even as in his larva stage, King Maimai was a massive behemoth buried frozen deep underground but known in legends by the people of the area. He was discovered slumbering underground by a mining crew who accidentally disturbed the ancient titan. The cave flooded, killing many but later, a survivor explained what happened to Hideki Go when he was sent by MAT to investigate. Throughout the day, his stirring caused small tremors to the nearby village. The next day, Go was lead into the abandoned mining tunnels to search for the monster. The Earth began to shake slightly from the movements of the titan that was beginning to stir but even though the tremors quickly stopped, Go's guide was terrified. Go soon came upon the cavern that had opened when King Maimai had awakened from his hibernation and went in to investigate, while his guide stayed behind due to fear of King Maimai. Go soon discovered the monster frozen in ice, likely for centuries. The yells of his guide accidentally fully awakened the giant up from its hibernation and King Maimai trapped Go as he tore free from his prison. MAT was quick to attack the monster as he tore the ice from his body but he merely fired his explosive gas at them, though failed to do much damage. Their attacks, as well as attacks by the locals, seemed to take their toll on the monster, blowing his arm off. But the monster was far from dead and his skin split straight down the middle, emerging as in his insect-like adult form, healing all the damage that had been done.

Expressing sympathy for the monster, Jack stepped back, and prepared to leave, only for King Maimai to rise again! While Jack was attempting to take off, King Maimai began firing his webbing at Jack, paralysing him and rendering him unable to use his Ultra Bracelet to fight back by trapping his arms with the strong threads. Jack fought through the paralysis, and eventually managed to free his limbs to continue the fight. Jack threw his Ultra Bracelet into King Maimai's mouth which travelled into his stomach. The Ultra Bracelet then transformed into the Bracelet Bomb and exploded, killing King Maimai instantly.

King Maimai reappeared in the series Redman episode 33 where he met up with Eleking and became friends. Before long, Redman showed up and fought up close after Eleking fired his gas grenades at him. After a seemingly close fight, after throwing both monsters to the ground, the hero killed them both by throwing his Red Arrows at them.

King Maimai appeared in a Japanese Variety Show where he fought a hero called Woodman. King Maimai, Red King, and Black King rampaged through the city where a young boy was watching the destruction. Through presumably his own willpower, he summoned a hero known as Woodman to battle the ferocious beasts. The kingly trio put up a good fight against the hero; however, they were eventually destroyed in a brawl to which Woodman disappeared after. 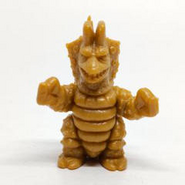 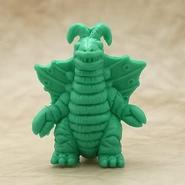 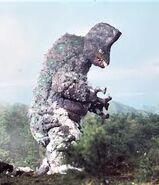 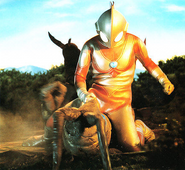 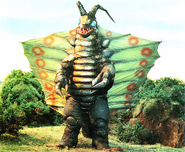