Jumborg Ace episode 1 "A Gift From the Emerald Star"

When Anti Go-Ne first lands on Earth on a mountain, he spots a lizard on the ground and shoots a laser from his staff at it to mutate it into a giant monster. Naming the newly created kaiju King Jaigras, Anti Go-Ne orders it to destroy the dam to drown Tokyo. King Jaigras starts attacking the dam until PAT arrives. The Captain, Shin’ya, starts shooting a laser gun at King Jaigras, but once he sees that a kid is trap at the foot of the mountain, he goes down to save her. Angered, King Jaigras tries to breathe fire at Shin’ya but when he manages to avoid the flames, King Jaigras shakes the mountain to have one of the boulders crush Shin’ya to death. Once Shin’ya is killed, King Jaigras breathes out smoke to disappear in and retreat. One Anti Go-Ne sees that PAT is protecting the planet, he decides to change plans and gets King Jaigras to attack Tokyo Bay instead. Once King Jaigras starts rampaging through Tokyo Bay, PAT arrives in their jets to fight back. However, Shin’ya’s brother, Naoki, arrive in his own plans to perform a kamikaze-style of attack to avenge his brother. Before Naoki could hit King Jaigras, the kaiju hits his plane with it’s fire breath and Naomi’s plane prepares to crash. Fortunately, Naoki gets saved by Alien Emerald, who gives him the ability to transform his plane into Jumborg Ace. As PAT continues firing at King Jaigras, Naoki transforms his plane int Jumborg Ace and does battle against the kaiju. At one point, Jumborg Ace gets King Jaigras in the ground and repeatedly clobbers it’s head until King Jaigras wraps it’s tail around Jumborg Ace’s neck. Jumborg Ace manages to pull the tail off of King Jaigras’ body, but this gives King Jaigras time to get back up. Once King Jaigras is back up, Jumborg Ace performs Heading Killer and uses his head fin to slice King Jaigras’ head off. With the head sliced off, Naokia watches as the headless body falls back and explodes upon impact to the ground. With Anti Go-Ne’s first kaiju destroyed, Naoki has avenged his brother’s death. 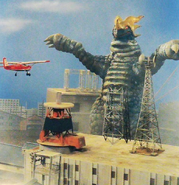 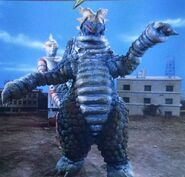 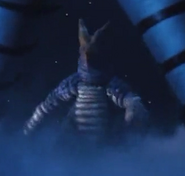 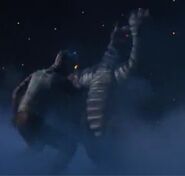 A model of King Zaigrasu

Add a photo to this gallery
Retrieved from "https://ultra.fandom.com/wiki/King_Jaigras?oldid=463909"
Community content is available under CC-BY-SA unless otherwise noted.