King Galactron (キングギャラクトロン Kingu Gyarakutoron) is a Belial Fusion Monster that was introduced in Ultraman Festival 2017, before being implemented into Ultraman Fusion Fight! and finally making a proper debut in Ultraman Geed.[1] It is a combination of King Joe and Galactron.

King Galactron appears in episode 22 of Ultraman Geed. After nearly losing in a three on one, Kei Fukuide transformed into King Galactron. Not long after, Ultraman Geed and Ultraman Zero arrived on the scene to combat the fusion kaiju. Kei then set his goal on the capsules within Moa Aizaki's car. King Galactron fired the Pedanium Hard Launcher, but was blocked by Geed. However the energy that spewed from the attack hit the car and caused it to crash. Zero came in and kicked him to the ground, allowing Geed and Zero to become Royal Megamaster and Zero Beyond respectively.

Even with their increased powers, King Galactron still posed a challenge for the two. The two Ultras eventually weakened him, with slashes from the King Sword and a Beyond Twin Edge. He was finally finished off with a combination of Geed's 87 Flasher and Zero's Twin Giga Break.

"King Joe! Galactron! This is the end mark."

After scanning both capsules in real time, Kei presses the trigger of the Riser and transforms into "Ultraman Belial". As the background changes into an eclipse, Kaiju Capsules of King Joe and Galactron appear briefly before "Belial" inhales them, morphing into and creating King Galactron. 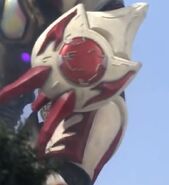 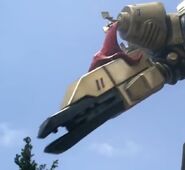 King Galactron appeared as the final boss of both Ultraman Festival stageshows.

In the first round of the stage show, King Galactron was transformed from Ultraman Belial into fighting against Ultramen Geed, Orb, Zero, X, Tiga, and Seven. Through the audience's own light, Seven, Zero and Geed transformed into Ultraseven X, Shining Ultraman Zero and Acro Smasher respectively as they perform a counterattack before finishing him with their combined finishers.

King Galactron vs Zero and Geed 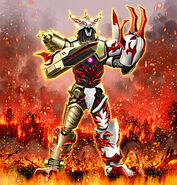