TBA
King Dainas (キングダイナス Kingu Dainasu) is a Kaiju that appeared in the TV series, Ultraman Neos. He appeared in episode 9.

After three children had discovered and stolen a pile of dinosaur bones from a laboratory, they buried them in a nearly field as their secret, unaware that the field was filled with Dark Matter. The Dark Matter had taken the dinosaur bones and combined them together, creating the monster King Dainas from them. Once the kids found the bones they took were missing and had transformed into King Dainas, they tried to take a photo of their success. However, the flash of the camera agitated King Dainas and the monster attacked the kids without mercy. HEART was quick on the scene to stop the monster, but their efforts were only minimal with the children's lives at stake. Genki quickly transformed into Ultraman Neos and proceeded to battle King Dainas in rather silly ways, including horseback riding and bullfighting, but King Dainas quickly ended the nonsensical battle and trampled all over Neos in hopes of ending the battle quickly. Neos however did not give up and after regaining the upper hand against the monster, Neos then used the Neos Eddie Beam to reduce King Dainas back into a skeleton, which then crumbled to dust and blown away in the wind. 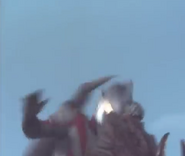 King Dainas at a construction site