TBA
King Crab (キングクラブ Kingu Kurabu) is a Terrible-Monster in Ultraman Ace. It was created by combining a Japanese horseshoe crab with a space monster.

King Crab was a Terrible-Monster sent by Yapool who surfaced from the ocean and attacked an oil rig using his tail and his thick, bubbly foam. TAC soon arrived to fight the crab-like creature but to no avail. King Crab continued his rampage, introducing his fiery stream attack. Just as it began to seem that TAC was getting the advantage, King Crab disappeared and was transformed back into a horseshoe crab, where he eavesdropped on TAC’s plan to defeat the Terrible-Monster. So he reappeared again, this time in the middle of an amusement park, and resumed his rampage.

Hokuto and Minami transformed into Ultraman Ace and fought against King Crab, both hero and monster taking sumo wrestling stances as the fight began. Ace had the upper hand and was beating the Terrible-Monster down, but King Crab wrapped his tail around Ace’s throat and started strangling Ace. However, Ace powered back and used a variation of the causing any damage and so he started blasting the houses that surrounding them with his fire causing a massive fire before Ace finally destroyed him with the Attack Beam. Ace then quickly extinguished the fires with the Ultra Shower.

Although not physically seen he became the tail of Tyrant, a monster who was created/combined by the souls of one of the past defeated monsters, which would appear in other movies.

King Crab was a combatant of the Dark Spark War. He fought well until he was turned into a Spark Doll by Dark Lugiel. He first appeared in the special as a Spark Doll about to be claimed by Alien Icarus until he was seen by Misuzu Isurugi and Kenta Watarai. Icarus refused to hand it over at first but he was then shot by Tomoya Ichijouji's Gunpad making the Spark Doll fall out of Icarus' grasp and into Tomoya's. Later, Alien Icarus stole the Spark Doll from Misuzu Isurugi, then along with Red King, Seagorath, Bemstar, Baraba, and Hanzagiran, he DarkLived King Crab and himself to form Tyrant. After Tyrant was defeated by Hikaru Raido as Ultraman Tiga and Tomoya Ichijouji inside Jean-Nine, all of the monsters, including King Crab, were turned back into Spark Dolls and were then collected by Hikaru and his friends.

In episode 7, him along with many other monsters are seen cheering Ultraman Ginga on as he fights Dark Galberos. It is likely that he returned to space in his original form after Ultraman Ginga defeated Dark Lugiel.

In the special, King Crab, along with many of the other Tyrant monsters (except Alien Icarus) to help host alongside Gomora and Alien Godola.

King Crab appeared in Ultraman X as a Spark Doll alongside Saramandora, Sadola, and two other unknown Spark Dolls recovered from an unknown mission by Xio. My Friend's a Monster

In the final episode of Ultraman X, after Greeza destroyed the Xio base, King Crab's Spark Doll was absorbed by Greeza. After speaking out to Gomora and striking Greeza right in the center of his chest, King Crab, along with all of the other Spark Dolls, traveled to X and united with him. King Crab's power was used to help form the Hybrid Armor and power up the Ultimate Xanadium to defeat Greeza once and for all. King Crab, along with the numerous other Cyber Cards and Spark Dolls, then appeared and thanked Daichi as he thanked them. The Rainbow Land 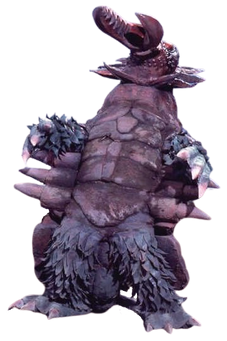 ―DarkLive announcements for King Crab and other Spark Dolls as Tyrant via the Dark Dummy Spark.

King Crab became a Spark Doll in the conclusion of the Dark Spark War due to the Dark Spark's powers. His Spark Doll was found by Alien Icarus and used to recreate the the kaiju Tyrant. Eventually, all of Tyrant's sets of Spark Dolls claimed by Hikaru when said monster defeated. After Dark Lugiel's defeat, King Crab was freed from the curse that befell him and along with other former victims, returned to their home worlds.

In Ultraman X, King Crab's Spark Doll was recovered by Xio in an unknown mission.

A figure of King Crab was released in 1992 by Bandai as a part of the Ultra Monster Series toyline. It stands at about 6 inches in height and has six points of articulation (including its tail which turns very stiffly). Its paint job and detail are mostly show-accurate, although there are a few minor differences between the figure and the character as seen in the show. One noticeable trait about the figure is that its tail is much shorter compared to the character's tail in the show. The reason for this is probably so the figure takes up less space in length, as well as probably to decrease the budget.

In later years, Bandai released another figure of King Crab, this time as a part of the Ultra Monster 500 toyline, this figure is based on the monster's Spark Doll variant. It is a slightly smaller figure than its UMS counterpart, standing as about 5 inches in height with five points of articulation. The detail and paint job is fairly show-accurate and identical to the monster's appearance as a Spark Doll. This figure is #19 in its series. 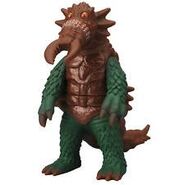 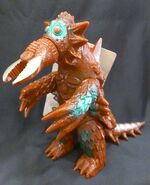 Figure of King Crab, by Bandai 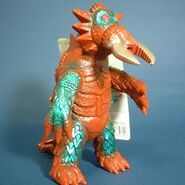 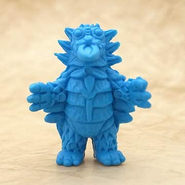 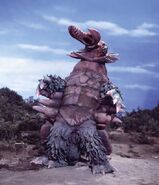 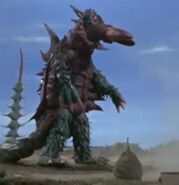 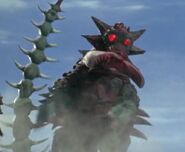 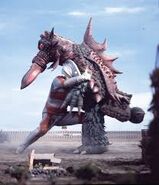