This may not be the article you are looking for. For the original dinosaur pages, see Dimetrodon and Tyrannosaurus (Koseidon).

None
Killer Dinosaurs are 2 prehistoric animals that were mind controlled by Leader Jericho. One is a Tyrannosaurus, and the other is a Dimetrodon.

Leader Jericho, and his Alien Godmes messenger, came up with a plan to mind control dinosaurs to kill humans. Being peaceful to Alien Godmes, they sent the two to attack an research base, and the beasts absolutely wrecked havoc there. The Koseidon Corps come after them, and successfully destroy the Dimetrodon's control system. However, the T-rex escapes, and is released again to attack the captured kids and Mori, but is stopped by Koseider. The Human Cannon successfully destroy the T-rex's control system, and the freed t-rex frees Mori and the kids from the chain, by biting and dragging it. 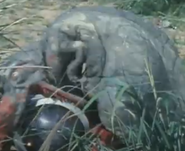 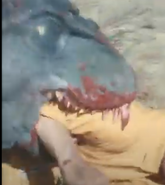 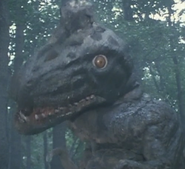 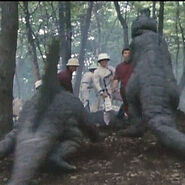