Khan Digifier (カーンデジファー Kān Dejifā) is the main antagonist of Denkou Choujin Gridman and the evil mastermind who created most of the monsters Gridman fought in his series.

He was known as Kilokahn in Superhuman Samurai Syber-Squad, the American adaptation of Gridman.

The main villain of Gridman, Khan was a legendary "devil" of the Hyper World that wished to wreak havoc on the Human World. Putting Takeshi Todo under his control, Khan Digifer uses him to create monsters which he brings to life in order for them to attack the Computer World. During Venora's attack, the monster's near-victory against Gridman had Khan announce his existence to everyone in Sakuragaoka via a large screen above the city to crush their hopes. This overconfidence bites him back, as not only the monster was defeated by King Gridman, but his and Gridman's existence had become a public knowledge.

Khan appeared again in Takeshi's recollection of Gridman's past battles. The scenario of Gridman's final fight was portrayed differently, in that instead of Khan destroying the Assist Weapons, he fought against King Gridman, resisting the firepower of Dragonic Cannon and destroy the entire King Jet armor that make up the formation. Unfortunately, Gridman burst from the armor unharmed and finished off Khan with Grid Hyper Beam.

Elimination Ray Digifier Beam
Add a photo to this gallery 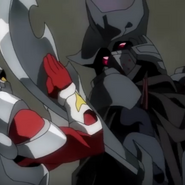 Retrieved from "https://ultra.fandom.com/wiki/Khan_Digifier?oldid=479458"
Community content is available under CC-BY-SA unless otherwise noted.