Kenzaburo Kikuchi
Kesam (ケサム Kesamu) appeared in episode 7 of the Ultraman Max TV series. A member of the People of Nebula KJ-K5, Kesam is part of an organization that takes it upon themselves to destroy all civilizations that cause nothing but wars among themselves. Kesam was responsible for destroying many civilizations throughout the universe, however, when he arrived on Earth, DASH member Mizuki Koishikawa was able to make him realize that his mission was wrong.

"To kill races that dirty and destroy their own planets, that is my mission."

Arriving on Earth thorugh a wormhole, Kesam came to destroy its civilization using a special bomb. Luckily for the people of Earth there was a mishap during travel and Kesam was separated from his weapon and left wounded. Sensing the dimensional disturbance, Dash members Kaito and Mizuki were dispatched to investigate. Upon arriving the two ended up separating with Mizuki falling some distance and injuring her leg then coming across Kesam in a cave while Kaito came across the bomb. In the cave Mizuki nursed the lightly wounded Kesam, talking to him and her belief that one day civilization and nature could one day live in harmony. Eventually Dash's Elly analyzed the device and discovered it was a bomb, Kaito was ordered to find Mizuki who he located with Kesam. As Mizuki talked to the alien, bonding with him he eventually revealed his intentions shocking Mizuki who argued that things could change.

Kaito arrived with his blaster ready, seeing the alien as an invader, when Misuki tried to defend her new friend, the alien agent took her hostage and used her to escape. When outside Kesam made his way to the bomb only to find that Ultraman Max had acquired it first. Kesam transformed, throwing Mizuki to the side and fought with the Ultra for the bomb. Kesam eventually used his energy whips to hoist the Ultra into the air, but he used his Max sword to free himself and deliver a deathly blow to the Alien.

Kesam was defeated and forced back into human form. As he lay there dying Max took the bomb and flew into space, but it was too late, the bomb was about to go off, it was then that Kesam deactivated it himself, deciding to believe in Mizuki's dream. He died peacefully in front of Mizuki.

The Kesam figure is part of the uncommon 2005 Ultraman Max toy line to go with the popular series.

Kesam after arriving on Earth 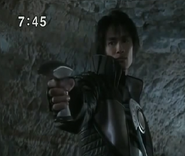 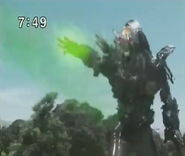 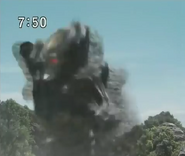 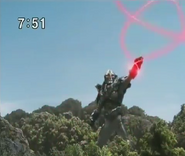 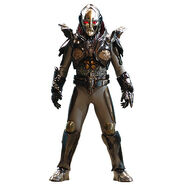 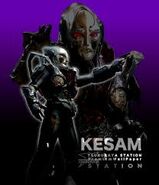