Twitter
Kensuke Takahashi (高橋 健介 Takahashi Kensuke) is a Japanese actor. He played Daichi Oozora in Ultraman X and later voiced the titular character in Ultra Galaxy Fight: New Generation Heroes. He also was one of the singers in X's theme, along with the group, Voyager.

Yuichi and Kensuke in behind the scenes. 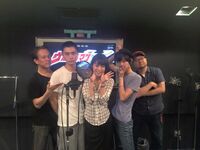 Retrieved from "https://ultra.fandom.com/wiki/Kensuke_Takahashi?oldid=511273"
Community content is available under CC-BY-SA unless otherwise noted.