Ultraman: The Ultimate Hero episode 1 "On a Mission from M78"

Kane Kosugi
Toshiyuki Morikawa (Japanese dub)
Kenichi Kai (ケンイチ・カイ Ken'ichi Kai) was an officer of WINR, and brief host for Ultraman Powered. He served as a field officer, and occasional pilot for the WINR team.

Upon analyzing an alien cocoon, team WINR intercepted two objects in space heading towards earth. However, one destroyed the other and lands on earth. WINR sent officers Kai and Young to investigate the crash site. Kai and Young found a strange red light within the crash site, but detected no radiation or thermal reading. Kai moved closer to investigate, but disappeared into the red Light. Kai found himself inside Ultraman Powered's Travel Sphere, and the two began to converse. Powered told Kai of the Alien Baltan's invasion, and how he needed a human host to combat them. Kai eventually agreed, and used the Beta Capsule which Powered gave to him. Powered entered the battlefield and destroyed the giant Alien Baltan that was wrecking havoc.

Kai continued to help Powered combat the rising waves of Giant monsters that were terrorizing the Earth. After many victories, Powered was defeated by the Baltan aliens Bio-Weapon, Dorako, but not before Powered was able to destroy the monster before disappearing. Kai was found by Young, and discovered that he had the Beta Capsule in his possession, and bore the same wounds that Ultraman did. Kai was hospitalized, and had one last conversation with Powered before he departed on his own to fight Zetton. Ultraman encouraged Kai, that though he may have left, 'his light is everywhere', and people need only find it. Ultraman then ended their bond and went to engage Zetton. Kai awoke, with his teammates waiting, and admitted that Ultraman was leaving. After Ultraman destroyed Zetton, he collapsed from exhaustion and was taken home by his comrades. As WINR remained unsure of their future, Kai recited Ultraman's parting words, giving the team encouragement for what was to come next. 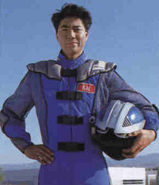 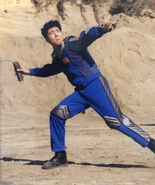