Raiga Terasaka
Kengo Manaka (マナカ ケンゴ Manaka Kengo) is the main protagonist of Ultraman Trigger: New Generation Tiga. He is a member of the expert team GUTS-Select, and transforms into Ultraman Trigger. With a sociable, kind, and hard-working personality, he has a fiery sense of justice that compels him to fight to protect humanity’s smiling faces.[1][2]

Kengo Manaka was born and raised on the now-colonized Mars, and worked as a botanist under the Sizuma Foundation. He has a plant called R'lyeh (ルルイエ Ruruie). He has had nightmares of a mysterious woman being wrapped in darkness, before a giant loomed over and cast a beam upon him.

Wanting to gather a soil sample from the ancient ruins found by his mother Reina Manaka, he went off to inspect the site. When Golba attacked, the ruins started to crumble, but he was protected from a falling rock overhead by a shield of light. At the same time, his hands and the giant sword in the ruins started to glow and react to him. Witnessing the distress of the people, Kengo is approached by Mitsukuni Shizuma, who granted him a GUTS Sparklence and an empty GUTS Hyper Key. His mother told him to "do what is right", leading him to go off to the ruins once again. The giant sword opens a hole to the bottom floor of the pyramid, where Kengo saw a giant statue of Ultraman Trigger, who gave him the light in order to transform after standing up to Carmeara. Trigger fought against Golba and Carmeara, destroying the former. After the battle, Mitsukuni offered Kengo to join the expert team GUTS-Select. Connection of Light

Kengo Manaka converts the GUTS Sparklence into its Sparklence mode, loads it with the GUTS Hyper Key, and by pulling the trigger held skywards he transforms into Ultraman Trigger.[1][2]

"Build the future, the light of hope! Ultraman Trigger!"

"Seize the victory, the light of strength! Ultraman Trigger!"

"Dominate the sky, the light of speed! Ultraman Trigger!" 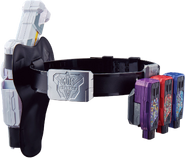