Kendoros (ケンドロス Kendorosu) was a kaiju that appeared in episode 7 of the TV series Ultraman Leo.

At space, Kendoros spit a seed to the Earth, grown into a flower. Kaoru later picked it up and gave it to her gaurdian Momoko Yamaguchi. Gen sensed it was of alien origins, but failed to confiscate it. At dusk, the flower grown larger and attempted to reunite with its master. Gen transformed into Ultraman Leo and chased it to where it fused with Kendoros, who had just arrived on Earth. As Leo was about to charge, Kendoros spun the flower like a propeller, causing a gust of wind which blew the Ultra away. Kendoros defeated the Ultra with a combined attack of his finger cannons and propeller boomerangs. The monster flew away, as well as an injured Leo.

The next day, Kendoros reappeared, attacking an oil refinery. Gen, whom had finished his training, transformed into Leo and battled Kendoros again. He started by ripping off both of the monster's arms and managed to repel all of Kendoros' boomerangs. Leo transformed into a razor wheel and destroyed his propellers. While in a verge of death, Kendoros used his body to roll against Leo but the Ultra evaded and instead, it hit the buildings and it was destroyed in explosions. 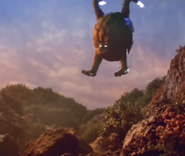 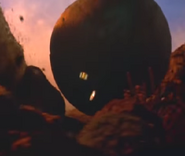 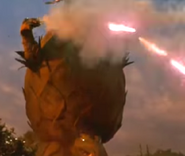 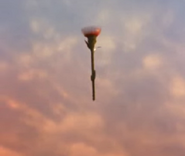 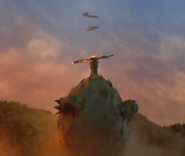 Boomerangs
Add a photo to this gallery 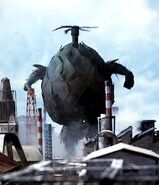 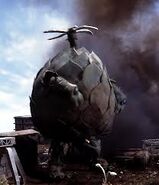 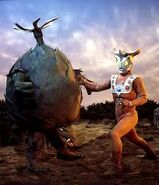 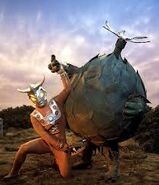 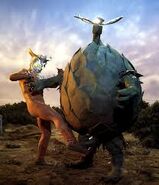 An extremely rare, and probably the most expensive kaiju figure of Kendoros, by Bullmark.
Add a photo to this gallery
Retrieved from "https://ultra.fandom.com/wiki/Kendoros?oldid=407232"
Community content is available under CC-BY-SA unless otherwise noted.