None
Ken-Chan (ケンちゃん Kenchan) is a villain who appeared in the Ultraman Taro manga. He mind-controlled children to use against Taro and takeover the world.

One day, two boys were fighting in Tokyo. While they engaged each other, a strange fetus-like humanoid attracted their attention. They were enthralled by the being who's name was supposedly Ken-Chan. The children soon told their friends about the being allowing Ken-Chan to also control them. This repeated several times until the being had most of Tokyo's children under his control. To test out his army, Ken-Chan sent them to attack the city, which they raided, beating various people to death and destroyed cars. Soon the army quickly took notice and attempted to stop the children only to fail as the soldiers refused to kill children. Even Ultraman Taro was unable to stop them, instead standing in their way as they continued to fire upon him with stolen weapons and tanks. However, eventually the attacks caused a crack in Taro's Ultra armor, allowing his inner light to shine through breaking Ken's control over the children, but also driving the evil creature made with its purity.

Enraged, Ken grew to a quarter of Taro's sized and attacked him. Despite the latter being a bit faster and harder to hit compared to Taro's previous enemies, he was little more of an annoyance than anything. First Taro fired an Arrow Ray through the villain, but Ken-Chan kept coming. The little creature hopped on the Ultra Warrior's back, preparing to cut his throat only to get nearly killed again by a beam from Taro's forehead. Seemingly out of options, Ken-Chan made one last desperate attempt by lunging at the hero. The hero reacted fast, firing an Ultra Beam, destroying him, and finally ending his reign of terror. 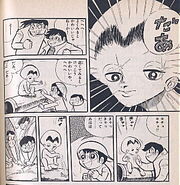 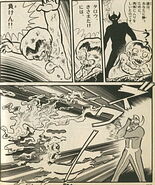 Add a photo to this gallery
Retrieved from "https://ultra.fandom.com/wiki/Ken-Chan?oldid=496230"
Community content is available under CC-BY-SA unless otherwise noted.