Kemur Man was from a highly advanced species of aliens that survived as a possible next evolutionary step for humankind. Although his longevity and physical capabilities surpassed a normal human's, his body was slowly weakening by the physical toll and decided to travel back in time to find suitable humans to keep himself alive. Arriving from his distant alien world from the year 2020, Kemur Man came to Earth, kidnapping innocent lives by using goo that gave the illusion of erasing them, turning them into X-channel light waves he could absorb. Before long the invader was soon discovered. A long chase ensued, but the alien was able to effortlessly outrun a police car! He then took on a new disguise and continued on with his mission until he was again confronted. This time a small military force was put up against him, forcing him to try and escape up a ferris wheel. Another round was shot into his body, making it drop to the unforgiving ground.

Soon after slamming into the concrete, Kemur Man began to grow larger, turning into a giant. Enraged, the alien lifted up the ferris wheel and smashed it into a nearby building. The soldiers around him opened fire, but nothing could stop him. As all looked grim, X-channel light rays were fired at him from the Tokyo Tower. The light rays severely wounded the invader, making him collapse. As the world celebrated, the Kemur Man being sprayed himself with his own goo, teleporting his entire body elsewhere and safely returning his victims by using mist and returning them to normal.

Years ago, the first Kemur Man was stopped. Now, as the age of Ultraman was at its strongest, the deadly Alien Mefilas created an illusion of the creature. The giant was summoned to Tokyo along with the illusion of Alien Baltan III and Alien Zarab II. The three stood their ground before the Science Patrol, awaiting their orders. Those orders, however, never came. Alien Mephilas was not a fan of violent tactics and made his three illusions vanish into thin air.

A Kemur Man Spark Doll was given to a maniacal biker by Alien Valky for him to get revenge on Misuzu. Upon seeking out his prey, the biker transformed into Kemur Man before her and chased the terrified girl through an empty school building. Eventually losing her pursuant, Misuzu was granted a brief respite when she bumps into a cop on patrol. However, Kemur Man reappeared behind the unsuspecting policeman, coating him with his teleporting goo. As Kemur Man closed in on Misuzu, he was ambushed by Hikaru with a soccer ball to the head. Frustrated, the alien engaged Hikaru Raido in a one-sided brawl, with Ginga's host getting brutalized by Kemur Man. Upon seeing how Hikaru was in trouble and remembering how he had always been there for her, Misuzu mustered all her courage and assaulted Kemur Man with a mop, subsequently landing a low blow to his crotch that caused the alien to writhe around in agony.

Annoyed and angered beyond his limits, Kemur Man finally grew into his giant form. With Ultraman Taro's timely arrival, Hikaru quickly UltraLived into Thunder Darambia to engage his now colossal foe. However, the Super Synthetic Monster was no match for Kemur Man's superior agility as his electrical attacks fail to connect. Getting cocky from it, Kemur Man exploited his speed advantage and ridiculed Thunder Darambia by farting into its face and stuffing a tree into its mouth. Deciding to put an end to Kemur Man's crazy antics, Hikaru UltraLived into Ginga. The tables immediately turned against the alien's favor as Ginga's speed far outclassed his own. After being kicked back and forth repeatedly by the warrior of light, Kemur Man was forcefully launched into space. Ginga then took to the skies and exited into space as he charged towards the frantic alien. Despite it's comical attempt to swim away, Kemur Man was ultimately caught by the hero's Ginga Fireball finisher. Reverting back into a Spark Doll, the alien fell back to Earth, landing near his traumatized and burnt biker host. A Midsummer Night's Dream

Kemur Man also appeared in the following episode, when his Spark Doll was saved by Taro after Hikaru's room was set on fire by Yuuka, King Pandon's Spark Doll host. With only one Spark Doll at his disposal, Hikaru UltraLived into Kemur Man and headed straight for his burning room. When Yuuka transformed into King Pandon, Kemur Man rose to the fight but failed to put up much of a resistance, being completely overpowered by King Pandon's fiery blasts. Weak and battered, he was then stomped on mercilessly until Hikaru UltraLived into Ginga and turned the fight against the Twin-headed Monster. Two-Headed Flame Beast

He soon reappears in episode 5 as a means for Hikaru to get into Jean-Killer's cockpit by coating himself with its teleporting goo. He is soon called back when the giant is called away. The Dream Destroyers

In episode 7, him along with many diffrent monsters are seen cheering for Ultraman Ginga as he fights Dark Galberos. The Closed World

It is likely that Kemur Man returned to space in his original form after Ultraman Ginga defeated Dark Lugiel. Your Future

One of the Dark Star Cluster (暗黒星団 Ankoku Seidan), Kemur Man was first seen with his comrades performing robbery in a warehouse at Earth. When Alien Valky Halky's Samekujira Jolly came to Earth for its master, the team approaches Xio and Jolly's owner, demanding it until Halky challenged them for a rugby match.

Three days later in the tournament, the Dark Star Cluster participated in the rugby and scores 51 points in the first half due to cheating with their powers until Isamu's fighting spirit turns the tables in the second round. Enraged when Isamu called them no side after the game ended, they enlarged and began on a rampaging spree before Ultraman X Gomora Armor sent them to the sky with Gomora Oscillatory Wave. We Are Nebula!

Another Kemur Man was a member of Dada's kidnapping syndicate, which bends on collecting ideal women on Earth for cloning with Dada's prediction that humanity is on the verge of extinction from Dark Thunder Energy.

Disguising as a drunk man whose walking to a bathhouse at night, his mission is to kidnap women with his shrink gun but before he can begin the operation, Xio members caught him and went for a chase. Kemur Man was stopped by Daichi (under Ultraman X's guidance) and apprehended by Wataru.

In the interrogation room, with almost every method failed, Captain Kamiki (dressed in a casual outfit) takes over and manages to get the information from Kemur Man after six hours by simply reminding him of his old life with his mother at his home planet. Feature Report! 24 Hours Inside Xio

Kemur Man reappeared as a Cyber Card in the final episode of Ultraman X. After Ultraman X spoke out to Gomora and striked Greeza right in the center of his chest, Kemur Man, along with all of the other Cyber Cards, traveled to X and united with him. Cyber Kemur Man's power was used to help form the Hybrid Armor and power up the Ultimate Xanadium to defeat Greeza once and for all. Kemur Man, along with the numerous other Cyber Cards and Spark Dolls, then appeared and thanked Daichi as he thanked them.The Rainbow Land

Kemur Man became a Spark Doll in the conclusion of the Dark Spark War due to the Dark Spark's powers. His Spark Doll was kept in Dark Lugiel's collection, and given to Alien Valky to give to evil-hearted humans to seed chaos.

This Spark Doll has been used on three occasions by two people:

After Dark Lugiel's defeat, the Kemur Man's Spark Doll is likely to have reverted back to its original form and depart Earth to return home.

In the 1992 PC game, the Kemur Men sent a biological weapon to Earth in the form of Iogon in their attempt to conquer the Earth.

Kemur Man reappears several times in a compilation of comedic fights inspired by Ultra Fight, he is seen driving a car with his tobacco to avoid being caught by Ultraman giving him a car ticket, but he gets stopped and reprimanded by the Ultra. Later, he is seen relaxing near a sand dune when Astra appears, having been told by Leo that he doesn't fight very well. Astra has the idea to chase Kemur Man around in an attempt to fight him. Kemur Man makes it to the top of the dune, but falls and rolls down to the bottom of the dune, dazed but unhurt. Astra thought that he had 'won' and jumps for joy. Then, he reappears skipping along, when Ultraman bumps into him and spills a bucket of water. The two fight, and Ultraman tries to say sorry, but Kemur Man continues fighting, and the fray continues! Kemur Man picks up a wooden bat, and the two face off against each other, before deciding to fight hand to hand again. Kemur Man then summons a small bomb, and throws it at Ultraman, and the two play 'Hot Potato' with it. Eventually, Kemur puts the bomb away, and Ultraman gets bored, beginning to walk away, when the alien suddenly draws a pistol, and begins to shoot at Ultraman with it, knocking him down. Kemur Man thinks he's won, when Ultraman gets back up, and reprimands him, then punches the alien in the face, knocking him out.

Kemur Man later appears in a segment when he whacks Seven over the head with a club. Seven pauses, and Kemur Man explains himself, and then dances to distract him. Zetton appears out of nowhere and restrains Seven, and both of them start tag teaming the Ultra. However, Seven somehow manages to get hold of a fan, and knocks Kemur Man out with it.

Kemur Man makes a return after almost 45 years in episode 7 of the variety show Ultra Zone, where he stops a robber from stealing a girl's purse. He even turns giant next to the modern Ferris wheel he attacked in his original appearance. 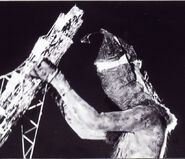 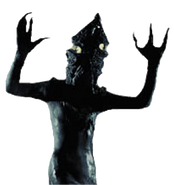 Kemur Man VS Thunder Darambia
Add a photo to this gallery

Kemur Man from the Stage Show.
Add a photo to this gallery
Retrieved from "https://ultra.fandom.com/wiki/Kemur_Man?oldid=437534"
Community content is available under CC-BY-SA unless otherwise noted.