New Ultraman Retsuden episode 40 "Legend Passed Down! Ginga Spark of Mystery!"
Kemular (ケムラー Kemurā) is a frog-like amphibian Kaiju that used its toxic gas to kill wildlife and feed. It was killed when Ultraman exposed its vital organ for the SSSP to attack.

Dozens of birds are found dead and Kemular soon emerges and attacks a few girls picnicking. The Science Patrol begins an investigation. While Fuji and Isamu investigate the problem, Kemular creates a cloud of smoke and the rest of the team arrives as back up when communications end. Kemular soon shows himself and the Science Patrol attack. After blasting the Kaiju with their weapons, Kemular again uses his smoke causing the team to retreat. Kemular makes his way to Fuji's downed rocket, but before it can crush the vehicle the team gives Isamu directions through the radio on how to take off and escape. Kemular advances to one of Japan's cities as Arashi works on a counter for the poisonous smoke. The military tries to halt the creature with a line of tanks but their shells have little affect and Kemular easily destroys them with his energy beams and manages to escape.

The monster soon smashes into the city and begins his rampage. Hayata's plane is blown from the sky and as he falls, Hayata transforms into Ultraman. Kemular held the hero off with his smoke and the Spacium Beam fails to destroy the creature. As Ultraman battled the creature, he held it up which allowed the patrol to hit his weak spot with a new weapon. Kemular falls down and manages to crawl back into his underground home, never to be seen again.

Unlike his original appearance, Kemular was a creature that wreaked havoc on China seventeen years earlier. Kemular attracted the attention of WINR after a farmer reported his whole herd of cattle 'disappeared' the night before. After WINR arrived at the scene, they saw Kemular and fired at the tail, with Kemular reacting using his sulfuric mist, causing their fighter to crash due to the pilot breathing in the gas it released.

Using meat to lure him to the surface, Kemular made himself known and used his long tongue to grab the bait. As WINR tried to fight it, Kenichi took the meat and used the car to drag the meat, luring Kemular away from hikers that he had saw but could not alert WINR to as their communications were interfered. Kemular caught the smell of the meat and started to track Kenichi as WINR continued their assault on him. Kemular then used wrapped his tongue around the meat and tugged at it which caused Kenichi's jeep to crash and shortly after turned into Ultraman Powered. Before Kemular was about to attack the hikers, Powered attacked him and began to do battle. Powered then held back Kemular's wings, allowing WINR to fire a missile at his brain and kill Kemular. 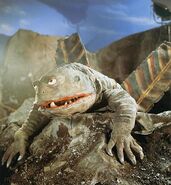 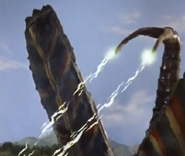 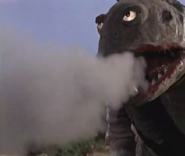 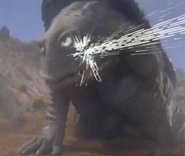 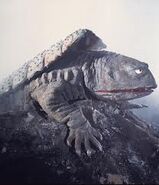 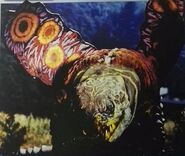 Kemular shopping with Godzilla and Gango. 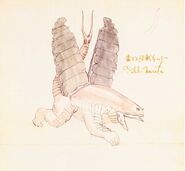 Kemular Anatomy (note the gas coming from his back)