Kemjila were an ancient species of giant insects that served as a natural prey for the volcano bird Kaiju Birdon. In the remote mountains of Japan, a long dormant volcano began roaring to life, but that was the least of anyone’s problems, as several gigantic Kemjila eggs were launched from the caldera in the eruption, hatching from them the ancient insect monsters. The prehistoric creatures soon began to burrow into local watermelon crops and eat them hollow. Kotaro took one of the seemingly untouched fruits with him back to some of his friends, unknown to them carrying several of the ancient fiends with them. One of his young friends that was sleeping in the back of their car began to hear the prehistoric insect larva move inside. One of the boys cut the fruit open and a Kemjila larva leaped out of it. The boy quickly got a net and tried to capture the tiny larva, but it kept avoiding him before finally spitting its blinding spray in his eyes. The mini monster tried to get at the boy's two birds, only for his mother to enter and frighten it off. As ZAT arrived to investigate, the Kemjila larva watched them from the buildings. But by chance, the boy had gotten a recording of the creature and played it for them. As another eruption occurred, another of the ancient Kaiju attacked scientists observing it, but soon the ancient predator of the Kemjila, the mighty Birdon, arrived, gobbling up the larva. However, many more of the tiny Kaiju remained, but with their natural predator on the loose, it appeared that their days could be numbered. As Kotaro investigated the area with the rest of ZAT, a Kemjila tried to feed on a fruit basket he had left for his friend, but was shot and killed. However, moments later, a creature fully evolved Kemjila began attacking the city.

After a short period of time as larva, one of the Kemjila would survive and metamorphose into a Kemjila adult, attacking the city. He captured one of ZAT’s members with his webs, prompting Ultraman Taro to come to the rescue and save him, then battle the monster. Taro managed to throw him several times, getting his head stuck in a building. The Kaiju then used a yellow smoke from his body to hide and let him regain his footing but Taro’s powers let him find him to continue the attack. However, the insect used his webs to lasso Taro and get him down, letting Kemjila pummel the Ultra with ease. A young boy wondered into the struggle, allowing Kemjila to pummel him then begin to choke him with his webs. But before Kemjila could finish the fight, Birdon arrived on the scene! Kemjila stood his ground, dragging his prey out of the way before preparing to attack Birdon. But Taro managed to free himself of the webbing and tried to utilize the Strium Ray on Kemjila, only for Birdon to ambush him from behind with his beak. While Birdon assaulted Taro, Kemjila decided to flee and live to fight another day. But after Birdon finished off Taro, he turned to face Kemjila. As the insect tried to defend himself with his yellow smoke, Birdon merely blew it away and proceeded to easily overpower him, finally delivering a flying stab to his chest and killing the insect before beginning to consume pieces of his corpse. 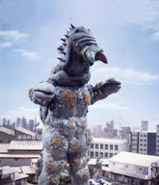 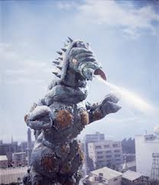 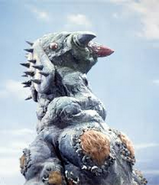 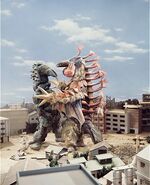 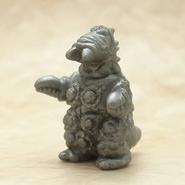 A Kemjila eraser
Community content is available under CC-BY-SA unless otherwise noted.
Advertisement