"Team EYES is different from the Defense Troops, we exist solely for the sake of protecting monsters."

―Fubuki at the conference during episode 37.

Upon his first debut in episode 1, he comes off as rather rude and grumpy, demonstrated by his actions as he reluctantly welcomes newcomer Musashi Haruno to the team. Despite his outward cool and mildly aggressive personality, he wishes to protect those close to him even if he dislikes to admit it.

Fubuki's personality and attitude towards his fellow comrades seems to have changed quite a bit compared to how he treated them initially. He eventually formed a deep friendship with Musashi. Although still rivals, it was now a more friend-based 'partnership' up to the point where even he acknowledges the name "spring breeze" team (Spring Breeze Duo), a name that was jokingly made by Captain Harumitsu Hiura earlier in the series.

Throughout the series, there appears to have been some internal moral conflict on how they should treat the monsters, having previously been in the Defense Troops who would attack monsters without hesitation if they threatened to harm the civilians nearby. Musashi's pacifist nature and will to protect the monsters initially puzzled Fubuki, however he eventually started to accept it.

Fubuki appears to have admired Ultraman Cosmos, initially unaware (like the rest of the team) that Musashi is in fact the host for Cosmos himself. He admits that, unlike the others who were explicitly told, he had come to the realization on his own that Musashi is Cosmos, near the end of the series.

Before joining Team EYES, Fubuki was a member of the Defense Troops, along with Shinobu Mizuki and Misaki Ai. He lived in the Village of the Fireflies (Firefly Village) when he was younger, and had a little sister named Sayaka.

In episode 5 he took out his anger on a monster called Chaos Bug for destroying the very scarecrow post before his eyes, having taken a photograph with it along with his family back when he lived in the village.

In episode 12, Fubuki and the rest of the team had encountered a monster called Ephemera, a monster who has a short lifespan of a day. Knowing this, along with how the monster was just a baby frollicking around for fun reminded him of his little sister Sayaka, who passed away at the age of three.

It is later known in episode 47 that Fubuki had a female friend (girlfriend?) named Misaki Ai (ミサキ・アイ) who died in an aviation accident back when he and Shinobu were in the Defense Force. Banes disguises herself as Misaki, attempting to hypnotize him into giving out important data, taking form of a sylph. It is perhaps because of this incident that Fubuki often wears the shades that Misaki gave back then every time he pilots the TECCH Aircraft.

In Ultraman Cosmos vs. Ultraman Justice: The Final Battle, he became the Captain of New Team EYES, fighting with the ideals of Musashi in mind. 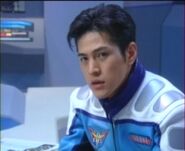 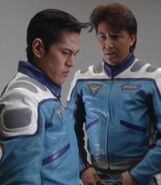