The Kedam were Kerus's soldiers, who attempted to destroy all of the branches of DASH. However, they failed, and all were killed. 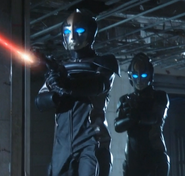 A Kedam firing with another variant of Beam Rifle