Shin Ishikawa
Kazuya Serizawa (セリザワ・カズヤ Serizawa Kazuya) is the first human host of Ultraman Hikari. Serizawa was originally thought dead until his reappearance under Hikari's control. Serizawa was the former captain of GUYS before Sakomizu replaced him.

Serizawa was the former commander of GUYS. When Dinozaur invaded the Earth, the then GUYS captain Serizawa had Ryu eject from their jet while he made a suicide run at Dinozaur high above the earth. However, just before dying, Hunter Knight Tsurugi united with him. Although it is though that his humanity has been cut off by the vengeful Ultra, his will allowed Mother of Ultra to restore Hikari's Ultra Spirit after the battle with Bogarl. Afterwards, Serizawa continue to fight alongside GUYS and Mebius as Hikari for a short while before leaving Earth and giving Mebius/Mirai the Knight Brace. When the galactic trickster Alien Babarue impersonates as Hikari and ruining Hikari's reputation on Earth, Serizawa/Hikari return to Earth once again to deal with this threat before returning back to space again. In episode 49, Hikari's power was inherited to Ryu after Serizawa entrusts everything to Ryu.

"But even now, I am like dead, I don't exist anymore."

Although it is believed that Serizawa is dead after the battle with Alien Empera, he was revealed to be alive and had completely assilmated with Hikari. While Ryu was in a trance with Ultraman King, Serizawa's voice was briefly heard by Ryu when Hikari appeared in front of Ryu as Hikari tells Ryu about the backstory of Armored Darkness and the Dark Sphere. He later called out to Ryu's name before Ryu merge with Hikari.

Knight Brace: During his time as Hikari's/Tsurugi's host, Serizawa transformed two ways, one was by using the Knight Brace and the other was using the Travel Sphere ability to switch between forms. When using the Knight Brace as Tsurugi, his transformation scene was in front of a dark background and Tsurugi's rise was through a dark tunnel of crystal walls. As Hikari, his back ground was bright yellow and Hikari's rise was first a dark prismatic design which changed to green/yellow color upon his growth. 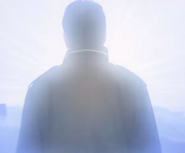 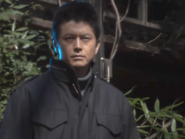