"Mankind, no, the Earth itself...is really just a tiny speck in the vastness of the universe. But Shin, mankind has something that is even greater than the universe."

Kazuma Asuka (アスカカズマ Asuka Kazuma) is a character in Ultraman Dyna. He is Shin Asuka's father and a test pilot of TPC.

Kazuma Asuka was once a pilot in TPC, and had been recognized as one of the best in the organization.

Kazuma was involved in the design of the groundbreaking new jet, Plasma Type 100, which was equipped with the Zero-Drive navigation system - an engine capable of traversing space at over 300,000 kilometers per second. He was selected to be the test pilot for the first experiment.

During the test, Masami Mishima flew with Kazuma and saw him off. However, the experiment had gone awry once Plasma Type 100 reached critical velocity: a strange tunnel of light had appeared in the flight path of the jet. Kazuma Asuka vanished into the light along with Plasma Type 100.

Within the events of the show, Kazuma only appeared in flashbacks; such as in Shin's imagination when Dyna was frozen by Reicubas. The Clarkov Won't Surface! Part 2 He was presumed dead for the majority of the show, but in the final episode, his fate is left ambiguous as shown when he joined his son in traversing the space-time continuum after the latter had been sucked in by the resultant wormhole due to Gransphere. Final Chapter III: Toward Tomorrow...

In the Ultraman Dyna Novel, a novelized retelling of several key events in the series by Keichi Hasegawa, the main writer for the Dyna series, Ultraman Dyna is revealed to be the transformed state of Kazuma Asuka. The explanation given is that Kazuma's presence into a 'dimension of light' and the drive system he was testing, somehow transformed him into a giant of light. He was stated to have then spent several years between the end of Tiga and the start of Dyna, fighting evil across space. However, upon sensing his son's crises, he flew across space and merged with Asuka to save his life. 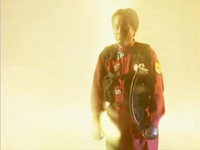 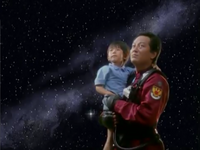 Shin Asuka as a child with Kazuma 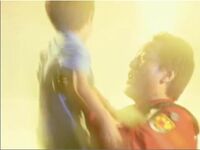 Add a photo to this gallery
Retrieved from "https://ultra.fandom.com/wiki/Kazuma_Asuka?oldid=539050"
Community content is available under CC-BY-SA unless otherwise noted.