None
Kawanoji (かわのじ, Kawanoji) is a kappa that appeared in the TV series, Ultraman Cosmos.

A kappa named Kawanoji by the villagers, lived in a lake in the village for centuries, playing with the kids in sumo. in present day Kappa appeared to save a villager from being attacked by a group of teenagers. Kappa felt bad for this so at night gave them medicine for them. Team EYES soon caught on to this and found him having drinks with the people. They begged not to tell anyone else, but surprisingly one of them had a heart attack and EYES rushed him to the hospital. Kappa followed, but was found by a policeman who shot him accidentally. Angry he grew to a giant size and tried to smash them with an electrical tower. Mushashi became Ultraman Cosmos and a sumo match began with the two. After one round he gave up so he could get a drink of water. It began again and Cosmos, with the support of his teammates. He picked up the monster and threw to the other side of the lake (arena boundary) and gave up and shrunk back down where he was cheered up by his friends. Kappa soon meets Mushashi the last time while checking on the old man in the hospital. 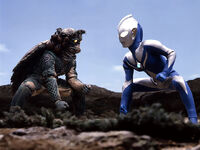 Retrieved from "https://ultra.fandom.com/wiki/Kawanoji?oldid=511253"
Community content is available under CC-BY-SA unless otherwise noted.