"That idiot won't be in trainee forever unless he get rid of his act!"

Masaharu Sekiguchi (films)
Noritake Kinashi (Parody Chapter)
Katsuto Asahi (朝日勝人 Katsuto Asahi) is the protagonist in the film Ultraman Zearth and its sequel. He is the human form of an Ultraman named Zearth, Katsuto hails from the Land of Bright in Nebula Z95.

Asahi is typically dressed in his uniform of a white red striped shirt, grey hat and pants, his Mydo uniform is a red flight suit and helmet.

Coming to Earth to clean the polluted planet Katsuto brought with him an incredible hygiene obsession and a fear of dirt. Joining the Mydo, disguised as a gasoline stand, Katsuto was relegated to the position of janitor because his fear of dirt interfered with his training stopping him from becoming a full-fledged member. However, when the team went out Katsuto would use the time alone to transform into his true identity Ultraman Zearth. Ultraman Zearth (film)

Pikari Brush/Pikari Brush 2: Katsuto uses this to become Ultraman Zearth. He first activates the brush and starts brushing his teeth. Then he raises it in the air and a flash of light transforms him into his Ultra form. 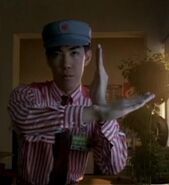 Katsuto is healed by his father

Katsuto at the end of Ultraman Zearth 2