"A Kaiju born from a transformed boy greedy for money. Money is his favorite food, which he regularly eats. He dies when the counter on his left chest goes to 0."

―The Battle Spirits description of Kanegon.

Ultraman Z episode 13 "I'll Feast on Medals!"
Kanegon (カネゴン, Kanegon) is a Kaiju that debuted in episode 15 of Ultra Q. Kanegon is one of the most well known Kaiju from the entire Ultraman Series, despite having only a few appearances.

One day at a construction site, a group of children were finding valuables in the dirt when a man on a bulldozer ran over their bikes. When the children went to recover them, one of them named Kanegon found a small object that had a jingle sound much like money in it. Later that night, the object grew into a magic cocoon that was releasing coins. However, when Kanegon went inside the cocoon, it started to swallow him up. That morning Kanegon woke up to find out that he had been transformed into an abomination. With everyone either being frightened or laughing at him, Kanegon could only rely on his friends to help him by giving him coins to eat. After hearing about his friends considering to take him to an old gypsy, Kanegon fled from the area and into the city where he started to eat some money from a bank that was being transported via suitcase. Somewhat dazed, Kanegon's friends helped him escape, only to be forced to do circus acts until he fell down. After unintentionally chasing the pair of bulldozer drivers from the day before, one nearly managed to run over Kanegon, but it fell from the edge of the hill. After the two bulldozer drivers were stuck in a hole, they desecrated the shrine of Kanegon's curse, launching him into the air and parachuting him back down. Upon landing Kanegon was turned back into a human. When going home, the boy found that his parents have also turned into Kanegons!

Originally lost in Venus, he was founded by Mydo and lived along with them while working at Mydo's gas station-disguised base as a primary worker out front, Digital Kanegon also doubled as a computer when needed.

He was the first to greet Alien Lady-Benzene when her human form appeared at the base as he was washing a car, refilling her motorcycle, charging her credit card, and then giving her an Ultraman Zearth action figure, which she promptly melted under her heel, though Digital Kanegon didn‘t seem to notice. He was later used to analyze data from the fight between Zearth and Ultraman Shadow. He also witnessed Lady-Benzene give her ultimatum of conquest with the rest of Mydo. After Lady-Benzene and her despicable robot Ultraman Shadow were defeated, Digital Kanegon began taking karate lessons at a local school.

While Kanegon doesn't appear in the series, a female counterpart of him, Kanegoneh (カネゴンヌ Kanegonnu), appears as a tribute to the coin eating monster.

Originally a human girl named Hanae Kanaya (金谷ハナエ Kanaya Hanae), her father was driven out of their home by her mother and older sister due to money. As Hanae saved coins inside her father’s favorite old vase, she noticed the money began to increase, and soon found herself addicted to money like her mother and sister. One morning Hanae awoke to find herself transformed into the coin-eating monster Kanegoneh. She was told by a fortuneteller that she will turn back into a human only if she meets the person she truly loves. She transforms back after meeting with her father.

In New Ultraman Retsuden episode 15, Kemur talks about Kanegon as his research topic.

In episode 7, him along with diffrent monsters are seen cheering on Ultraman Ginga as he fights Dark Galberos.

It is likely that Kanegon returned to space in his original form after Ginga defeated Dark Lugiel.

Kanegon was the twelfth monster to be UltraLived by the Live Pad and he was Lived by Hikaru Raido. He was seen staring in awe at all of the coins falling from the sky and all the glowing, floating money signs and then realized he was hungry and was about to starve to death until he heard Mochiron's cry for help, snapping him out of his hunger before vanishing with Alien Miracle taking his place.

One night at STORAGE, Kanegon appeared while Haruki Natsukawa was on duty. Desperately hungry for money, Kanegon ate Haruki's Ultra Medals by mistake, causing the Coin Monster to see visions of Ultraman Z.

After devouring the medals, Kanegon asked Haruki to tell him about Ultraman Z. Hearing about Haruki and Z's first battle and transformation into Alpha Edge caused Kanegon to spit up the three corresponding medals, causing Haruki to realize how to get the other medals back.

However, they were interrupted by Shota Hebikura, who heard the sneeze when Kanegon returned the medals. Haruki managed to bluff that he had sneezed, and that Kanegon was his sleeping bag, before Haruki dragged Kanegon to the main room.

Once in the main room, Kanegon mentioned that he was hungry, causing Haruki to pull out a jar of his coins and offer Kanegon one of the coins. Kanegon simply went for the jar, forcing Haruki to scrabble for any coins that were spilled. Realizing that he had to hurry before his medals were digested, Haruki told Kanegon about Beta Smash, causing a brief freak out from Kanegon when he mistook Beta Smash for Redman. However, as Haruki finished telling Kanegon about Beta Smash, Yuka Ohta entered the main room, forcing Haruki to dive to catch the medals and pretend that he was practicing his diving. Haruki was then forced to listen to Yuka talk about Grigio Raiden while quietly keeping Kanegon from causing any trouble.

After Yuka left, Kanegon started pretending to be Ultraman Z, thinking that it would be fun to be able to beat up monsters. This led to Haruki explaining why STORAGE and Ultraman Z fought to protect the defenseless, as well as allowing him to explain the doubts he was having about being forced to kill the monsters he fought. Kanegon said that he thought the reason Haruki could transform into Ultraman Z was because the medals trusted how kind he was.

With that off his chest, Haruki proceeded to tell Kanegon about Gamma Future. As Haruki finished explaining, Kanegon said he could feel the medals moving, then said that he felt he might be finished. Falling over, apparently dead, Kanegon caused Haruki to shout its name before he got up and scrambled for the restroom. As Haruki entered, Kanegon was heard asking how to open the stalls before he was heard relieving itself all over the restroom.

Its indigestion cured, Kanegon said farewell to Haruki before leaving, promising that he would see Haruki again.

Much like with other monsters from earlier series, Kanegon appears in the comedic family show, Chibira-kun.

Kanegon reappeared in Redman episode 19 where he ran away from Redman before the hero decided to chase Woo and then the two monsters teleported behind the hero and fought him. They proved to be a worthy challenge for him but then the two ended up getting killed by impalement from the Red Arrow simultaneously.

Kanegon appeared in Kaiju Busters as a 'salesman'.

Kanegon appears in a short story where it is trapped in a time loop with Redman. In the beginning, it was spared but its body became mutated from tan to green after many rewinds, making it appear like a zombie (Shoddy). Redman then decides to kill Kanegon but the rewind occurs after each death and the two are once again locked in combat. Kanegon is continuously revived to suffer death at the hands of Redman who appears to be unaware of the time loop. Kanegon breaks free of the time loop by predicting the path of Redman's Red Arrow and catching it. The two stare at each other for a moment before they go their separate ways. Redman 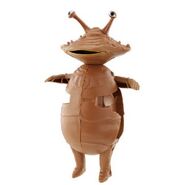 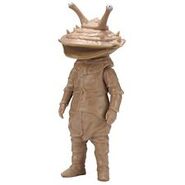 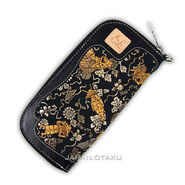 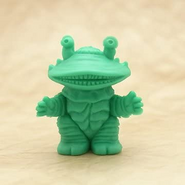 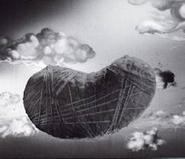 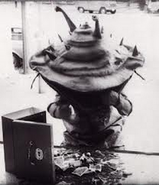 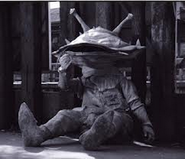 Kanegoneh resting in an empty tub

A painting by Tohl Narita of Kanegon emerging from his cocoon

A painting by Tohl Narita of Kanegon 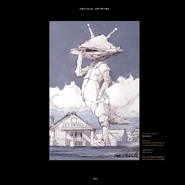 A Kanegon scetch by Tohl Narita with information on the right 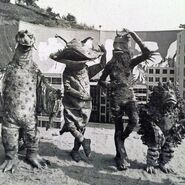 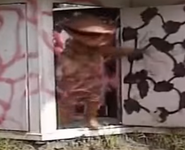 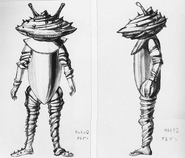