Kanedoras (カネドラス Kanedorasu) was a Kaiju that appeared in the TV series Ultraman Leo. It appeared in episode 5 of the series.

A monster of space, Kanedoras began to attack Japan’s cities. As it vented its rage, MAC began to strike back, but the beast unleashed its blade. After several throws, Kanedoras flew into the air. He returned some time later, just in time for Gen to test out his new strength from training. Dodging the blade repeated times, Leo caught the blade and impaled the beast in the eyes with it. In agonizing pain, Kanedoras was helpless as Leo jumped up and came down with the lethal Leo Chop, slicing the monster clean in half. Don't Cry! You're a Man 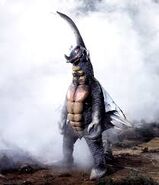 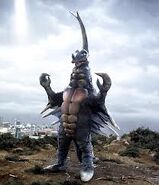 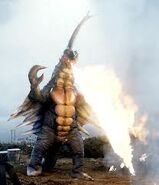 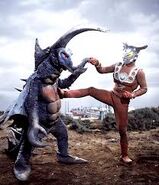 Figure of Kanedoras, by Bullmark 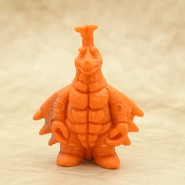