Since 1983, Kane Kosugi has been a voice actor for video games, stunt actor in movies, and character actor in both English and Japanese films. In his first movie, Revenge of the Ninja, he played the son of his real life father, Sho Kosugi.

With the intention of following in his father's footsteps, Kane trained to become a martial arts actor. Kane has an extensive martial arts background in wushu, ninjutsu, taekwondo, karate, judo and kendo.

Kane has a brother, Shane, who has made occasional appearances on Kinniku Banzuke (known on G4 as Unbeatable Bansuke). He was also romantically involved with female golfer Riko Higashio, but they broke up in 2005. In December 2009, Kane married a woman from Hong Kong.

There was a rift between him and his father when Kosugi chose to persue his career in Japanese television instead of help his father run schools, but since he attended Kane's wedding, it is possible they have since reconciled. 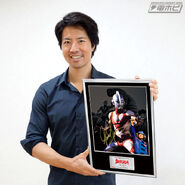