TBA
Kamagyrus (カマギュラス Kamagyurasu) is a Kaiju that appeared in episode 21 of Iron King. He is Titanian Operative No. #3 and serves Titanian No. #1. Like all the other Titanians, he wears a black hat, a red cloak and a white mask. In his giant form he is an insect monster.

Titanian Operative #3, dispatched to acquire a deadly nerve gas from an Earth scientist, failed. Gentaro and Goro interfered, sending the hostile invaders into a new desperate plan. As the heroes kept a watchful eye on the man, the aliens returned and the third operative transformed! The mantis-like giant was confronted by Iron King and was quickly outmatched by the massive superhero. Tossed around and beat to a pulp, the beast was sent into total retreat. However, all was not lost. While Kamagyuras lost its bout, the invaders successfully kidnapped the daughter of the scientist they were in the process of making a deal with!

Kama Guras struck back when its deal with the scientist over his daughter’s life went sour. It was quickly attacked by Gentaro’s Iron Belt, causing the alien menace to spray sticky webs from its abdomen. As the hero was restrained by the sticky substance, Goro transformed. Iron King immediately attacked and severed its upper claws with his explosive flashes! Screaming in agony, the monster tried to flee but Iron King followed. As Gentaro burned the webs from his body, Kamagyuras began to spray the hero in mid-air with them! They fell to the Earth and Iron King was trapped, but Gentaro quickly caught up with the battling forces and caused a brush fire that freed the red giant. In a desperate attempt to win the fight, the mantis launched one of its lower claws but the hero caught it and threw it back! The blade sliced through the insect’s head, decapitating it! Before its body could fall, Iron King then blasted it with an emerald beam, completely destroying its lifeless remains. 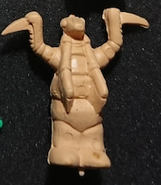 A Kamagyrus eraser.
Community content is available under CC-BY-SA unless otherwise noted.
Advertisement