"Now show me this form, the cursed descendant of the god of destruction! Wrap everything in flames, burn all lives! Destroy this world! The worst monster of this universe, Kaiser Gyrares XIII!"

In an in-fiction setting, Kaiser Gyrares XIII is stated to be the cursed descendant from a family and has destroyed countless planets and star systems, while serving under evil beings for 13 generations.

Kaiser Gyrares XIII was created as a model by a man named Shunsuke Kuji (久地俊介 Kuji Shunsuke), a toy modeler, to win a competition that his company was holding. Unfortunately, the judge accidentally ruined the model. Shunsuke tried desperately to fix it overnight, but the son of the director of another company won the prize instead. To make matters worse, he was also not notified by the judge in advance. This enraged him and made him quit his job. Somehow, he obtained the Red Sphere, which he used to bring his creation to life, and it went on a spree of destruction, targeting Shunsuke's old workplace and the boy who won the competition. To protect the city, the same three boys who wished King of Mons to life did so once again. However, King of Mons was defeated by Kaiser Gyrares XIII. In a desperate situation, actor Takeshi Yoshioka was entrusted with the light of Ultraman Gaia by Gamu Takayama, and he transformed to fight the monster. Gaia finished off Kaiser Gyrares XIII using the Photon Edge.

However, that was not the end of Kaiser Gyrares XIII. Its cells were used by Charija along with many other monsters' cell samples to create Demon Gyrares XIV. Tiga, Dyna, and Ultraman Gaia Novel: The Adventure in Hyperspace 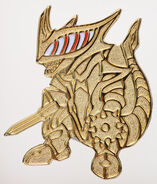 A card that comes with the novel, signed by Hiroshi Maruyama
Add a photo to this gallery

Retrieved from "https://ultra.fandom.com/wiki/Kaiser_Gyrares_XIII?oldid=446965"
Community content is available under CC-BY-SA unless otherwise noted.