Kaera (カエラ Kaera) is a seijin that originally appeared in the now banned series, Metal Kaiser.

Kaera was a mysterious being from space, barreling out of space without warning. After the invader destroyed a satellite, SAM attempted to defeat him their selves, sending two of their attack jets to intercept him. Despite their tries, Kaera simply shrugged off their beam attacks, laughing in amusement. On the way down, he made several circles in the air, letting a jet crash into him just to show them their vain tactics. He eventually just crashed into a city's park face first, sliding a bit before getting up. He terrorized the city with joy which was quickly ruined by SAM's continued efforts to stop him. Out of annoyance, Kaera chopped at the jet of most bother and sent it going down. Yuan Dong transformed into Metal Kaiser and proceeded to catch it, setting it down nicely before preparing for the fight against the alien.

Kaera and Metal Kaiser engaged each other, the former proving to be a tough opponent even with the Crystal Bangle working as a sword. Things were immediately turned in the invader's favor as the hero looked away, allowing him to get a sneak attack from behind on him. The two tumbled around the park, losing the Bangle into the sky. Once the scuffle ended, Kaera caught the Crystal Bangle with ease. He attacked, swinging the sword all over the place and making it so Metal Kaiser could only dodge. The hero eventually managed to make Kaera lose it, the sword flying upward and being charged by a lightning bolt and with it back, turning the tides back against the invader. He and SAM coordinated an all-out assault of their greatest weapons, overwhelming the enemy until a combination attack was used, sending Kaera flying back from a mighty explosion to once he came for what could be hoped for good. 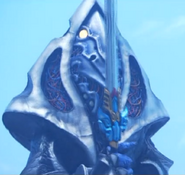 Swordsmanship
Add a photo to this gallery 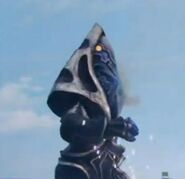 Add a photo to this gallery
Retrieved from "https://ultra.fandom.com/wiki/Kaera?oldid=410746"
Community content is available under CC-BY-SA unless otherwise noted.