The Phantom Militia’s most unusual weapon, being based on mammalian animals such as armadillos rather than dinosaurs, Jurass-Don was used as a decoy for Gentaro and Iron King. While the heroes battled the huge robot in the streets, the Phantom Militia was able to move freely through the city and kidnap Professor Fukunaga. The scientist had developed a robot that could sense human brainwaves and move freely around them with it. With this technology, their robots would prove undefeatable! When the target was acquired and in their possession, Jurass-Don retreated from battle. There was no more reason to fight. However, when Gentaro rescued the captured scientist, his daughter, and friend Goro, Jurass-Don was unleashed again!

In the chaos, Goro transformed into Iron King and challenged the two-headed weapon. It quickly began to blast the hero with superheated flame and icy mist, but the giant countered. He redirected the attacks back at the killer while Gentaro leaped onto his shoulder! The brave man tossed a grenade into the giant’s top jaws. When the explosive detonated, it triggered a domino effect that engulfed the robot’s entire body in a huge explosion and destroyed it. 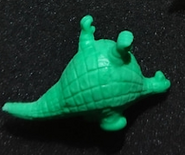 A Jurass-Don eraser
Community content is available under CC-BY-SA unless otherwise noted.
Advertisement