Fireman episode 5 "The Boy who Fell into the Jurassic Era"

Jurasaurus (ジュラザウルス Jurasairousu) is a mutated dinosaur Kaiju that lived during the Jurassic period and is a Kaiju that appears in the series, Fireman.

Jurasairous is an ancient dinosaur that lives in a cave deep underground, which was exposed to the surface by a strange orange chemical that dissolved the ground. With his home exposed to natural light, Jurasairous rapidly evolved, switching from a herbivorous diet to a carnivorous one instead.

After Daisuke Misaki, Tychimba and a little boy fell down the tunnel into the cave, Jurasairous awoke and began roaring! The mutant dinosaur attempted to eat the three only for Daisuke to grab his Fire Stick. He then fought the dinosaur as Fireman! Jurasairous had the upper hand, and bit Fireman numerous times. SAF arrived to assist the hero by using the Moglian, firing missiles at the giant dinosaur. Fireman finally used his Fire Flash to defeat Jurasairous, leaving him victorious. 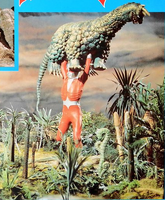 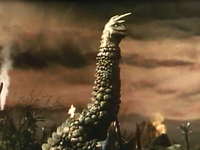 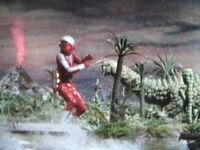 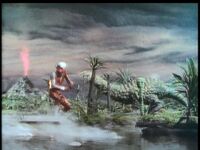