This may not be the article you are looking for. For the planet of the same name, see Planet Juran.

Juran was an ancient plant that had been released after a powerful earthquake rocked Japan. Juran's presence was first felt by the appearance of its roots, splitting up streets, buildings, and even the imperial palace. Soon roots broke through the walls of one of the larger buildings, wrapping around victims and stealing their blood to feed Juran. As the structure was being evacuated, the building split in 2, revealing Juran to the world. As the world watched on stunned, the most brilliant minds tried to find a solution. A powerful toxin was deployed with flamethrowers. As soldiers burned the roots from below, the toxin was dumped on the flower from above. Within minutes the colossal plant began to wither, quickly dying and decaying until nothing was left. Mammoth Flower

After the ZAP SPACY crew members Oki and Captain Hyuuga stopped to investigate a corpse of a Mukadender. Juran appeared from underground to attack them by releasing its poison pollen. Litra appeared to do battle with it. Juran managed to keep Litra way from itself by using its vines, but once Litra used her Citronela Acid on the plant, Juran withered away.

Though Juran itself didn't appear, the seeds of one were shown to have fallen into the hands of Alien Barossa II, who consumed the seeds to grow to a gigantic size after being confronted by Haruki Natsukawa and Jugglus Juggler. Beliarok

Similar to Barossa II, a Juran seed was acquired by the later generation, Barossa IV. He lost the seed first, but was eventually found along with Kedamya when confronted by Ignis. He later consumed it and grew into gigantic size, able to fight Ultraman Z and Trigger.

A Juran, named as the Mammoth Flower (マンモスフラワー Manmosu Furawā), was among the S-Class Species that appeared across Japan and were dealt with by the SSSP. In particular, the Mammoth Flower appeared in central Tokyo, emerging from the ground and blooming in front of Tokyo Station. 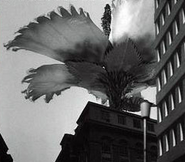 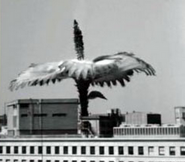