In 2004, Jun married an actress named Mariko Yanagisawa and they had two children. However, they later divorced. 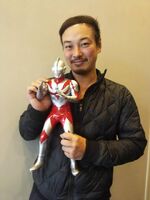 Add a photo to this gallery
Retrieved from "https://ultra.fandom.com/wiki/Jun_Takatsuki?oldid=511218"
Community content is available under CC-BY-SA unless otherwise noted.