None, Jumborg 9 is controlled by Naoki Tachibana

Jumborg 9 (ジャンボーグ Janbōgu Nain) is Planet Emerald's fighting Robo No. 2 and first appeared in the 1970's TV series Jumborg Ace. Jumborg 9 was given to Naoki Tachibana by the brother of the original Alien Emerald. He is disguised as a Honda·Z minicar, known as Jum Car Z (ジャンカーZ Jan Kā Zetto) or just Jum Car. After the appearance of 9, Naoki has used him to fight alongside Jumborg Ace. Jumborg 9 is present durring the final battle of the show.

Jumborg 9 is painted with silver on one half of his body, and fiery orange on the other, and the rivet styling on his chest armor is prominent feature. 9 has more armor and brute strength than Jumborg Ace which makes him a fatal force to be reckoned with, as monsters only struggle against Ace they have no chance against 9. However due to 9's emphasis on power, he can not transform into a flying vehicle, though he has high mobility, being able to run at mach speeds on land.

Jumborg 9 was not built with the intention of following his pilot's movement or flight like Jumborg Ace, he instead has a manual operation that utilizes the interface of a normal car, such as a handle and feet pedals, also making use of gear shifts, with the maximum speed limit being mach 9. It should also be noted that when piloting Jumborg 9, his movements in battle give off the sound of a car.

Although Jumborg 9 cannot fly using the method described above, he later had rockets built into him in order to fly to the moon when Naoki with Jumborg Ace was having difficulties in the final battle against Demon Go-Ne in episode 47. During said battle Jumborgs Ace and 9 were incapacitated by Demon Go-Ne, but the second Alien Emerald then appeared and took the wheel of Jumborg 9. Together Naoki and Alien Emerald II finally defeated Demon Go-Ne. Alien Emerald II is not shown on screen piloting Jumborg 9. 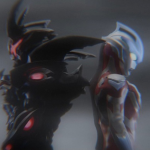