Jumbo King (ジャンボキング Janbo Kingu) is the final Terrible-Monster that appeared in episode 52 of Ultraman Ace. In a first for the series, Jumbo King is a chimeric monster composed of four other Terrible-Monsters previously used by Yapool - Cowra, Unitang, Mazaron Man and Mazarius.

Later Yapool released Jumbo King again, this time in the heart of a city. With only TAC as it's opposition, Jumbo King easily withstood their assaults and downed them all at once when they tried to ensnare him with a net. With the city leveled from his Terrible-Monster's rampage, Yapool recalled Jumbo King again. The next day Yapool unleashed Jumbo King again, this time in the city where Hokuto was hiding out in. Endangering the lives of several children, Hokuto was quick to evacuate them while TAC tried to destroy the monster with a newly crafted weapon they've created (which failed). Shortly after killing Alien Simon for revealing his true nature, Hokuto transformed into Ultraman Ace for the final time to battle against Jumbo King. Unfortunately, Jumbo King's size and durability was too much for the Ultra to handle and Ace was quickly overpowered. Motivated by the words of all his friends he had made, Ace didn't give up and continued fighting. Ace then fired his Metalium Beam at Jumbo King's head, weakening the Terrible-Monster enough for Ace to use the Guillotine Shot, decapitating the Terrible-Monster and killing it. With Jumbo King dead, Yapool's reign of terror on Earth had seemingly come to an end. 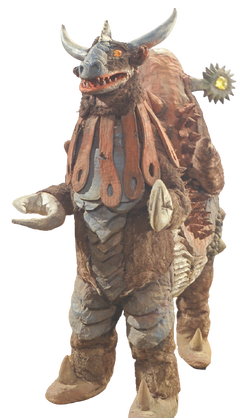 In Pictorial First Volume 2002, Giant Yapool and Alien Steal are said to be components of Jumbo King. Although Alien Steal is nowhere to be seen, the image of Giant Yapool does appear in the formation. 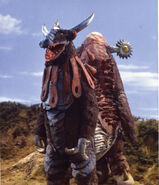 Jumbo King in a magazine

A toy of Jumbo King 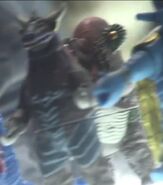 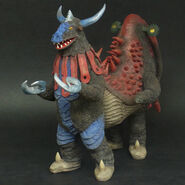