Kazue Fukiishi
Julie[1] (ジュリ Juri) is the human form of Ultraman Justice. Her only appearance was in the 2003 film Ultraman Cosmos vs. Ultraman Justice: The Final Battle where she served as a secondary antagonist and later protagonist halfway through the film.

Some time before the beginning of the movie, Ultraman Justice took on the form of Julie so he could exist on Earth for an extended period of time to fulfill their mission given to them by Delacion, to 'reset' life on Earth at the expense of all current life forms inhabiting it. Arriving just before two Gloker Pawns, she telepathically contacted Musashi questioning him on why he had separated from Ultraman Cosmos and why the other Ultra resisted the decision. Then the two Glokers arrived along with Cosmos who battled the machines to protect the ships that would take Earth's monsters to a world where they could live in peace, Julie questioned the notion of the 'dream' Musashi spoke of before he remerged with Cosmos to assist him. Seeing the machines be deactivated, Julie denounced the dream as simple foolishness before transforming into Justice who reactivated the machines and eventually 'killed' Cosmos and Musashi. She appeared later at a conference for the world's leaders explaining her purpose and the fate of the world before leaving. As she walked the Earth, she watched humans from afar seeing them only as the base creatures she was told they were, until she met a little girl and a little puppy who made her begin to question her mission and her notions of humanity.

When the humans attacked the Gloker ship the minions of Delacion attacked in full force, Julie was still apathetic to the plight of the humans but was shocked to see the Earth's monsters had joined in to battle with the Earth forces. Sensing the little girl she met before, Julie sped of to rescue her and was touched by the notion that she refused to leave her puppy despite the risk to her own life. Finally seeing what Cosmos saw in mankind, Julie helped the pair and transformed into Justice, this time to save Humanity.

After a long battle, Justice/Julie was shocked to see a revived Cosmos who healed her and the two went forth to defeat the last Gloker before heading out to face the superweapon Gloker Endra. Despite their new found strength the two were defeated but they fused their powers together into Ultraman Legend stopping the superweapon. The superbeing separated back into Cosmos/Musashi and Justice/Julie as Delacion appeared, Julie vouched for the people of Earth.

The two Ultras eventually changed back into human forms and Julie and Musashi were met by the Earthling's friends, just as Julie cracked her first smile ever since she appeared on Earth.

Just Lancer: Unlike most Ultras, Justice does not have a traditional rise scene. Instead, Julie puts her Just Lancer at her chest and she becomes a ball of light before flying up. Then it will reveal Julie in her Ultra Form as Justice Standard Mode. Her rise is similar to other real time transformations.

Juile put the Just Lancer on her chest

Juile becomes a ball of light before flying

Justice ball of light flying towards the battlefield

A figure of Justice appears and....

Released as part of the Cosmos-themed Deformed Pattern Acrylic Charm series to commemorate the show's 20th anniversary, Julie (which is drawn in an Anime-fied style) is one the items to be produced as hanging acrylic keychain.

She (and the rest of the characters) is available as a made-for-order item (where the customers can choose one during purchase) for Bandai Fashion's webstore in 2020, and later the Premium Bandai site at August 2021.

Julie's first appearance in the film 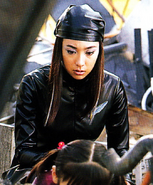