Kazuyasu Sasamoto (Andro Melos)
Juda (ジュダ, Juda) is the youngest of the Gua siblings and one of the three leaders of the Gua Army alongside his brother, Mold, and sister, Gina. Juda and his family serve as the main villains of the Andro Melos manga series as well as in the Andro Melos TV miniseries. Juda later appears as the main villain of Ultraman Story, which is a prequel to the miniseries. In Ultra Fight Victory, he was revived by Yapool as Juda Spectre, and serves as the series' main antagonist. Juda's most recent appearance was in the second part of Ultra Galaxy Fight: The Absolute Conspiracy, where he and Mold served as part of Absolute Tartarus's army of Parallel Isotopes.

Said to be the spawn of the devil, Juda was defeated 50,000 years ago by Father of Ultra. Juda was an immaterial entity born from a Spacial Distortion and whose life was tied to that distortion. Because of this he desired to spread the distortion around the Universe, strengthening himself but threatening the stability of the Universe. After finding that he literally could not fight the space demon, Father of Ultra, used the training of his father and grandfather, and used his Ultra Horns ability to gather large amounts of energy to become strong enough to repair the distortions in space, resulting in Juda's defeat. However, Juda would later revive thousands of years later as the distortion that first created him returned. Now returned to the universe, Juda unleashed his evil by reviving Alien Hipporit to attack earth. While Ultraman Ace was preoccupied with the alien, Juda confronted Father of Ultra and the two battle, with Juda emerging victorious in all but killing him. As Father of Ultra was being restored, Juda then revived the monster Enmargo to attack earth, leaving Ultraman Taro occupied in fighting the evil monster. As Taro bravely went to Earth for his first real battle, Juda summoned the spirits of Alien Baltan, Red King, Gomora, Alien Mefilas, Eleking, and Alien Hipporit and combined them to create the monstrous machine known as Grand King. Juda laughed with pride as he watched Grand King easily shrug off opposition from the other ultras (Ultraman, Zoffy, Ultraseven, Ultraman Jack, and Ultraman Ace.) Even with the late appearance of Taro to assist his brothers, Juda's creation was far too powerful for them to defeat. However, Juda's plans were foiled after the other ultra brothers merged with Taro and Grand King was destroyed by Taro's Cosmos Miracle Beam. With his minions all destroyed, Juda then fled to the deepest reaches of space. Ultraman Story

Juda is the commander of the Gua Army and is part of the demonic Gua along with his older brother, Mold, and younger sister, Gina. He is the main villain of this series, which acts as a sequel to Ultraman Story. In the finale, Juda is killed. Andro Melos

―Juda Spectre after getting resurrected by Yapool.

After his previous defeat from the Andro heroes, Juda revives from death every tens of thousand years, with the process would cause distortions felt throughout the galaxy. Once he fully revived, chaos would envelope the universe. Yapool in Ginga's universe sought to harvest the energies of the Victorium Core to fully revive the emperor. Leo, Astra, Hikari and Ace were sent by Ultraman King to stop Yapool from reviving him. Vakishim, along with Doragory and Verokron, was summoned by Yapool to deal with Leo and Astra. The Leo brothers fought them while Victory was fighting Ace Killer and Lunaticks. At first it seemed that Leo and his brother were getting the upper hand until the dimensional distortion expanded and Juda was revived. Finally, Victory, Ace and Ginga arrived to help the Leo Brothers with Yapool likewise assisted his Terrible-Monster, with Leo fighting Vakhishim, Astra fighting Doragory, Ace fighting his sworn enemy Verokron and Ginga and Victory fighting Yapool. Under Ace's advice, Ginga and Victory merged into Ginga Victory and killed Yapool but everything had been too late: Juda successfully revived as he summons Super Grand King Spectre to fight the Ultramen.

Ultraman Victory Knight entered his space distortion and both engaged in a sword fight but seemingly weakened, he summoned the Shepherdon Saber and his spirit had made the energies of Victorium Core turn against Juda. Now with the tides turned against him, Juda was defeated by Knight Victorium Break while his monster, Super Grand King Spectre defeated by the other Ultras. Ultra Fight Victory

It was revealed that along with Juda, his two siblings, Mold and Gina were also revived in similar ways, but they couldn't get to Earth in time to save him from being defeated. They managed to enter The World Where The Ultra Flare Occurred in an attempt to rebuild the Gua Army, and later used Juda's soul to recreate Gua in his new Spectre form. The Shining Sky, and the Land Beneath It

Juda Spectre appeared in episode 1 of this miniseries as he was revived and summoned by Reibatos to help him accomplish his goal of conquering the universe. He then confronted Ultraman Zero on Planet Yomi and then readied themselves to fight each other.

As the two of them fought, Juda Spectre proved to be a very capable fighter against Zero and the arrival of the Mecha Gomora's spirit summoned by Reibatos only complicated the matters for the Ultra. As Juda held Zero in place, Mecha Gomora fired his Knuckle Chains onto the victim, only for Ultraman Orb in his Lightning Attacker form to arrive in the nick of time and knocked away the attack. With that trouble taken care of, Zero broke free and Orb gave Juda an electricity-infused punch to the chest. Zero then continued fighting Juda while Orb started to fight Mecha Gomora. Even though the Ultras held the upper hand against their enemies, their attacks seemed to have no effect on them, and thus, the two decided to power up with Orb transforming into his Orb Trinity form and Zero transforming into Ultimate Zero to even the odds.

In his transformed state, Zero managed to match and surpass Juda in swordsmanship with his Ultimate Zero Sword. Afterwards, Juda, alongside Mecha Gomora, got defeated by a combination of Orb's Trinitium Break and the Zero's Sword Ray Ultimate Zero. The two evildoers then exploded and disappeared, possibly to return back to their resting places. Ultra Fight Orb

Juda Spectre, alongside his brother Mold, were taken from the time of Andro Melos by Absolute Tartarus, thus avoiding their original demises at the hands of the Andro Super Warriors.

Following the recruitment of Ultraman Belial and Ultraman Tregear, the Gua Brothers were sent to Satellite Golgotha, where they were met by the 6 Ultra Brothers. As Taro remarked the two should be dead by the hands of Ginga, Victory and X, Juda did not know who he was talking about. Juda was engaged by Ultraseven, Ultraman Ace and Taro, who swiftly managed to stagger him with the Emerium Beam, Punch Laser and Arrow Beam respectively. With the two brothers dazed, Taro absorbed his comrades, becoming Super Ultraman Taro and finishing the two off with the Cosmo Miracle Beam. In his dying breath, Juda called out to their sister Gina to avenge their deaths. The Divergence

Juda Spectre is released by Bandai under the Ultra Monster 500 Series. 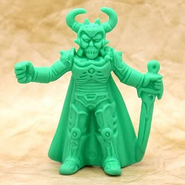 Juda in Andro Melos with Mecha Baltan and Zabiden 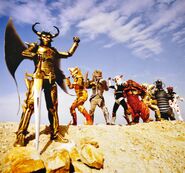 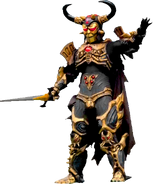 Juda in his revival

Juda faces off against Ultraman Victory 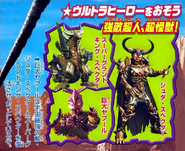 Juda along with Yapool and Super Grand King Spectre

Juda being Summoned by Reibatos