TBA
Jomonoid (ジョーモノイド Jōmonoido) is a Kaiju who was taken into the past by the Dark Espers to destroy the golden pyramid that held three Ancient Ultras, one of which being Ultraman Tiga.

A massive dinosaur-like beast, Jomonoid appeared in the Japanese countryside and began to wreck havoc. It was confronted by the Neo Super GUTS' newest member Tsubasa Madoka, the son of Daigo and Rena. As the Kaiju and the GUTS Alpha Superior fought, a time warp opened above them and transported them into the ancient past of Japan. The Kaiju was quickly brought under Dogramagma's control, an evil magician with dreams of ruling all of Japan.

Jomonoid was unleashed and attacked a village. No spear or catapult could help to stop it. Having found the Sparklence and knowing what it was from his mother’s descriptions, Tsubasa transformed into Ultraman Tiga. As Tsubasa was not the chosen one, he could not fully revive Tiga to his full potential. With the village burning around them, Tiga grabbed Jomonoid by its tail and tossed the Kaiju away, forcing it to return to its master.

When the heroes returned to get their revenge on Dogramagma, Jomonoid was again let loose. This time armed with their own magic and Tsubasa’s fighter, they managed to stall the Kaiju enough for Tsubasa to transform into Ultraman Tiga. Tiga then fought and defeated Jomonoid with his Zeperion Beam. Ultraman Tiga Gaiden: Revival of the Ancient Giant

Tsubasa (as Ultraman Tiga) finishes Jomonoid with the Zeperion Beam 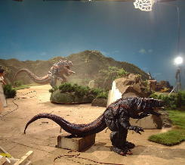