TBA
Jirenma (ジレンマ Jirenma) was a Kaiju that appeared in the TV series Ultraman Taro.

A worm-like creature, the Jirenma Larva made a home at Kotaro’s girlfriends’ house. After their dog went missing and Kotaro found a melted box and burn trail, ZAT was called in. After investigating and leaving, the human host of Ultraman Taro then found the creature. After crushing it didn’t work, he fired a laser beam at it. This only made the monster quickly grow into a kaiju-sized behemoth and begin to rampage. After growing to Kaiju proportions, the creature began to melt buildings with its mist! Kotaro, unable to transform with his girlfriend around, was forced to flee as ZAT attacked it from the sky. It smashed through the building Kotaro and his friend were and grabbed the human form of the silver and red giant with its long tongue.The pair managed to escape its grasp just as the human forces dropped fire bombs on it! It then created a new sort of mist that extinguished the flames and continued on its course of destruction! When it smashed through another building, the falling debris knocked out Kotaro's girlfriend and pinned him under rubble. With no one around, the human called upon the giant yet again. Jirenma fired its acid mist once more, critically wounding the hero as it slowly ate through his body. ZAT was again ready to save the day as they dropped a blue powder on the giant, canceling out the acidic properties of Jirenma’s power. Now able to stand up to the mist, Taro had little problems. He tore off its antennas and blew its long tongue in half. As it cried in pain, he then delivered the killing blow with the Strium Ray, blowing the monster to bits. 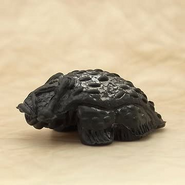 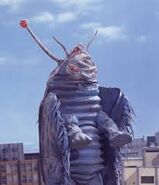 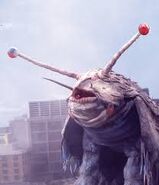