One day, a girl named Akane Tachibana was ridiculed by her friends including a boy named Kota Noda for her dream to swim with a whale at the sea. Due to her depression, Chaos Header had overheard her wish and created an illusion of a flying whale. She was excited by this, and named it Jirak. After Musashi tried to explain to her that the whale was a trick, she denied it, due to having her will overwritten by the Chaos Header. The girl was absorbed by Jirak, and it transformed into Chaos Jirak, and proceeds to use its heat ray on Kota who had teased her earlier. Musashi turned into Ultraman Cosmos to stop the attack. Cosmos managed to outmaneuver it and used to Full Moon Rect. However, Chaos Jirak managed to overpower Cosmos with its electric energy whip. However, Kota managed to apologize to Akane for his earlier actions, and also promised her to make her dreams come true. This caused the beast to be paralyzed, which allowed Cosmos to quickly spirit her away. Chaos Jirak then disintegrated into light particles.

A Chaos Jirak was captured by Charija as part of his monster business but was forced to be unleashed as vanguards for the Red Sphere. Chaos Jirak fought against Ultraman Dyna Strong Type and clashed with Psycho Mezard as they were on the receiving ends of Tiga's Rambalt Light Bullet and Dyna's Garnate Bomber. Tiga, Dyna, and Ultraman Gaia Novel: The Adventure in Hyperspace 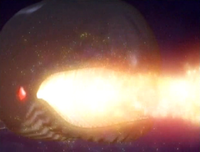 Chaos Jirak (カオスジラーク Kaosujirāku) was the transformed state of Jirak after it was infected by Chaos Organism.

Electric Energy Whip
Add a photo to this gallery 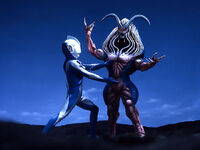 Chaos Jirak
Add a photo to this gallery
Retrieved from "https://ultra.fandom.com/wiki/Jirak?oldid=511200"
Community content is available under CC-BY-SA unless otherwise noted.