Ultraman episode 10 "The Mysterious Dinosaur Base"

Jirahs (ジラース Jirāsu)[1][2][3] was a mutated frill-lizard Kaiju created by a mad scientist who aspired to create a legend-worthy beast. It was killed in a duel with Ultraman.

Of all the Ultra Kaiju in the Ultraman Series, Jirahs is among the most recognizable for his appearance.

Jirahs is actually a redesigned Godzilla suit. Unlike Gomess, Jirahs was created simply by combining the head of the DaisensoGoji suit (from the movie Invasion of Astro-Monster,) with the body of the MosuGoji suit (from Mothra vs. Godzilla) with some yellow paint sprayed on parts of his body and a yellow frill around the neck. To further demonstrate the similarities between Jirahs and Godzilla, Jirahs possesses a modified but still slightly recognizable Godzilla roar, as well as his Electric Ray attack bearing a very close resemblance to Godzilla's own atomic ray. Also adding to Jirahs' close relationship with Godzilla, the portrayal of Jirahs was done by suit actor Haruo Nakajima, who is famous for portraying Godzilla in the first twelve Godzilla films.

The reason behind Jirahs' creation was because at the time of Ultraman's production, Tsuburaya actually intended for a different design for the monster for Ultraman to fight, but due to the minimal budget at the time (which is seen between episodes 8 through 19) and a very short schedule, Eiji Tsuburaya had negotiated with Toho Co. Ltd to have the Godzilla suit loaned to Tsuburaya Productions, which had been left in Toho's warehouse now that Toho, at the time was moving on to use a new suit for Son of Godzilla. The conditions for using the suit however was that it'd be in good condition once filming was complete.

It can also be said that Jirahs' creation and appearance is to pay homage to the creation of Godzilla himself as Eiji Tsuburaya made his career famous in handling the special effects for Toho Co. Ltd, and for creating many of Godzilla's enemies and allies.

A monster created by Professor Nikaido, Jirahs was being raised in Lake Kitayama. When reports of an abundance of fish suddenly disappearing in the lake came in, the SSSP was called in to investigate. When they didn't find any clues, the captain let them go on a vacation nearby at a nice hotel until they could be picked up. When Ide went fishing with a female reporter who had interviewed the scientist, they saw the scientist out on the lake about to feed Jirahs. They then went to his house to investigate, but were beaten there by the scientist himself. When he found them in there, he took them hostage since they saw him earlier.

When the rest of the SSSP went looking Ide and the reporter. Jirahs was released by the scientist to attack them. With the Scientist holding off the SSSP and revealing that Jirahs was his creation, the scientist pulled off his mask to reveal his true self as an acquaintance of Captain Mura. During the scuffle between Jirahs and the SSSP, the Scientist got trampled by Jirahs, causing the monster to go out of control. Ide fixed his radio and told the rest of the SSSP that he was being held hostage in the scientist's house. Then right as the SSSP was about to get them out, Jirahs came and attempted to destroy the house with them inside it.

Hayata pulled out the Beta Capsule and transformed into Ultraman. The battle was slow paced with Ultraman in control of the match, shoving Jirahs back to test his superior strength to the monster. Once the monster was provoked, Ultraman tore off Jirahs' frill and taunted it even more by imitating a matador bullfight with it. After wrestling with the angry monster, Ultraman punched Jirahs as hard as he could with an Ultra Sword Haze in an attempt to knock the monster out. Jirahs began bleeding profusely from the mouth and collapsed, dead. Instead of detonating the dead monster with his Spacium Beam, Ultraman paused for a moment to replace the kaiju's torn-off frill, and stood for a while to pay his respects to his opponent before flying away to recover his energy.

After almost 49 years since his last appearance in Redman, Jirahs reappears in the Ultra Fight-inspired series, Sevenger Fight, and fought Sevenger at some point prior to Ultraman Z.

While the Monster Research Center was investigating its origin, Jirahs was presumed in-universe to be created by a mad scientist. Haruki piloted Sevenger and was sent to intercept the monster before he could advance to a nearby urban area. After ripping off the frill (causing Jirahs to become agitated), Sevenger performed the Heat Haze Slash attack taught by Kojiro Inaba to kill Jirahs. As a sign of respect, Sevenger retrieved the monster's severed frill, and covered its head with it.

A Kaiju Medal of Jirahs was made by Celebro, who proceed to use it to empower a Telesdon into Erimaki-Telesdon.[4][5] Robot-2 Activation Plan 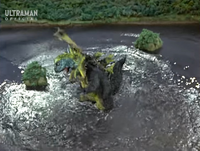 Jirahs first appeared in episode 13 where he fought Alien Baltan by pushing him down a hill. Redman intervened by throwing his Red Arrow near them. From there, the two decided to work together to take down the hero until Redman tricked them into ramming each other, killing them in the process.

Jirahs reappeared in episode 15 where he charged at Redman and stopped at the edge where he barely fell off. Jirahs then continued his fight with Redman again and eventually lost after the hero threw his Red Arrow at his chest and got killed in the progress.

In episode 16, Jirahs was walking up a hill with his former enemy Alien Baltan until Redman appeared once more and fought them. Despite their improving teamwork, in the end, Jirahs meet his end after a judo throw while the alien turned chicken and ran away.

Jirahs reappeared in episode 61 where he fought Redman again right from the start, this all alone in a desert. After grappling with each other and rolling down a hill, they both fought each other and kept each other balanced with throws, grapples, and punches and kicks but Jirahs was eventually defeated once again, this time with a Red Kick to the face from a hill.

In episode 70, while Eleking was dealing with Redman, Jirahs took it upon himself to give the hero a hard time by teaming up with the electric Kaiju after jumping from a cliff. Even though they did have the team advantage against the hero, he never gave up and held his own against them. Jirahs eventually got killed by being repeatingly stabbed in the frill by the Red Arrow.

Jirahs reappeared in episode 75 where teamed up Alien Icarus right from the start to fight Redman at a beach. They started out the fight by teleporting from the sand to the top of a cave, where they jumped off and onto the alien hero and gained the advantage against him from the start, but the hero never gave up and he held his own against both the monster and the alien, keeping the fight evenly matched. After Redman killed the alien with his Red Knife, he defeated Jirahs by punching him multiple times in the face and then thrusting his weapon into the monster's mouth.

In the 100th episode of the show, Jirahs appeared again and put up a much better fight than last time, being able to dodge Redman's Red Arrow and keeping up with his combat prowess, resulting in an evenly matched fight with him and Red Killer (who provided backup) against the alien hero. In the end, Jirahs was defeated by a Red Kick to the face.

Jirahs reappeared in episode 103 where he showed up to help Gudon when he was having difficulty against Redman. Even though they had him on the ropes when they came at him at the same time, Redman held his own against both monsters with his usual moveset of throws, grapples, punches, chops, and kicks. After he killed Gudon with his Red Knife, the alien hero turned his attention towards Jirahs and defeated him with his Red Fall.

In episode 107, Jirahs teamed up with not only Red Killer, but also Gudon and Peguila as well. When Redman encountered all four monsters after he came down from a hill, all four monsters crossed their arms, disappeared through smoke, reappeared in many angles of the alien hero, and then circled around him before fighting him. While the alien hero did his best to hold his own against the monsters, they proved to be more of a challenge for him. Eventually, Redman pulled through and defeated all four monsters with an explosion from throwing his Red Arrow to the ground.

Jirahs reappeared in episode 109 where he assisted Shugaron in fighting Redman. Even though both monsters gave him a hard time in the fight, the alien hero didn't give up and held his own against both monsters with his usual moveset. Eventually, after he defeated Shugaron, Redman defeated Jirahs by jumping up and then delivering a Red Chop to the face.

Jirahs made her final appearance on the show in episode 110, where she assisted Gudon in fighting Redman one last time after they rolled down the hill together. The two monsters managed to give the alien hero a hard time in battle due to their teamwork, but nonetheless, Redman didn't lose hope and held his own against them with his usual moveset. Eventually, just like he did with Gudon, Redman killed Jirahs by stabbing her in the chest with his Red Knife.

A Jirahs is seen in the first segment of the OVA on board The Train In The Vary Dimension to comute to work. A second Jirahs, called Jirako is later revealed in the third act as a past love interest for Ultraman. As is the case with the OVA, Ultraman suffers bad luck through misunderstandings, and when seen hugging Jirako, his wife and children get mad. Ultraman Graffiti: Wild! Ultra Country

In the segment where Ultraman is flying around in a large bubble, he briefly passes an apartment where Jirahs is living. He is cooking meat in a frying pan, and breathes fire on it to make it cook. Jirahs later appears in the orchestra the Ultras put together to cheer up Seabozu, playing trumpet next to Gomora. Ultraman M78 Theater Love & Peace

In the puppet centric Ultra P, a young Jirahs called Jirahs Jr was introduced, appearing with its father and several Kaiju and aliens singing the various Ultraman-related theme songs.

Jirahs appears as a robotic kaiju built by Professor Nikaido to feed into conspiracy theories that kaiju are a international hoax perpetuated by the USP to allow world governments to impose greater control on their citizens and holds a rally in Iceland to showcase the artificial kaiju and rally support. When the USP moves in to intercept the artificial kaiju and try and offer their side of the story, Captain Muramatsu and Kiki Fuji are attacked by the mob, being interrupted by Jirahs emerging just as Shin Hayata parachutes down to help them. Hayata transforms into Ultraman to battle Jirahs, but they are soon interrupted by the arrival of a living Zumbolar that attacks both of them.

In part 2 of episode 151 Sgt. Frog, when Fuyuki accidentally logged into the Real Adventure Game, a game where the player would face a monster in reality, he, Natsumi, Keroro and Giroro were forced to fend themselves against Capras (カブラス Kaburasu) a monster which was a homage to Jirahs. According to Fuyuki, the monster resembles a giant Chupacabra with a frill on its neck, much like how the Jirahs suit were simply the first Godzilla suit added with a frill on the neck. Also, when Capras fought an enlarged Giroro, he ripped off Capras' frill similar to Ultraman's fight against Jirahs. 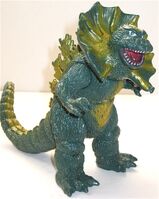 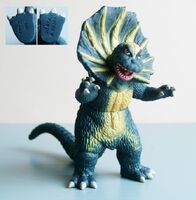 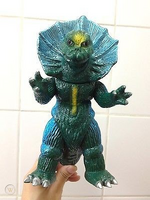 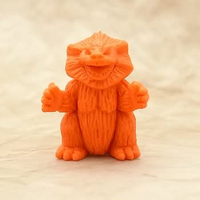 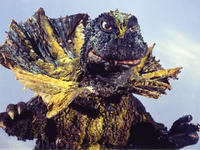 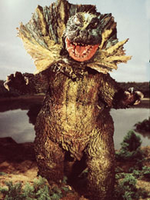 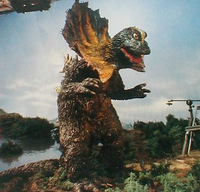 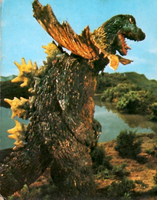 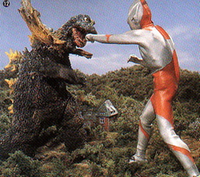 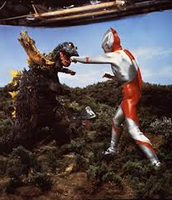 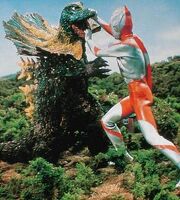 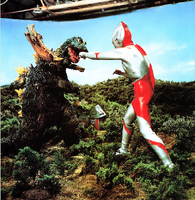 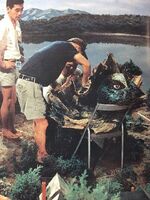 Jirahs as he appeared in the stage show 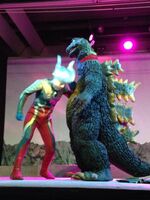 Jirahs with his frill removed 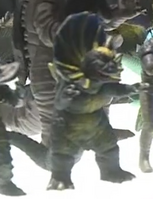